Repaints are a double edged sword.  On one hand, they provide a great way to use an existing character in a new way.  On the other hand, collectors almost always wanted something new during the vintage line's heyday.  But, repaints became a thing in 1983 and continued through 1994.  In the vintage line, though, repaints were almost always excellent redos that brought something new to the character.  While this would change in 1993, the repaints released in the first decade of the line tended to be sold in subsets.  The main repaints were sold in color themed ensembles.  But, later, the figures started to appear in other subsets, but as just solid repaints instead of being married to a specific palette.  In 1990, Hasbro released the high priced Sonic Fighters subset.  While all the figures in the series are well done repaints, today we look at Dialtone.

Dialtone is one of my favorite figures.  This stems not only from the figure's quality, but also the circumstances of the character entering my collection.  (See the 1986 Dialtone profile for that saga.)  I had both of his 1986 color schemes and always found a way to include Dialtone in whatever adventure I could conjure up.  But, as I was completely out of Joe by 1990, I never saw this Dialtone in stores.  This new black, silver and blue color scheme was a strong entry for the character.  But, upon learning of this figure's existence, I didn't really take much time to track him down.  Instead, I was more interested in picking up additional 1986 figures.  And, this 1990 figure (acquired in a very early lot of 1990 figures I I bought back when no one cared about any figure after 1987) simply faded into the drawer of his contemporaries.  When Dialtone returned to retail in 2000, I army built that figure.  And, again in 2002, I snatched up a few extra cheap figures from the BJ's set.  Still, I never really thought of this Dialtone version.

In recent years, though, my obsession with all things obscure lead me back to this figure.  I found the color scheme stronger than I remembered.  And, his overall appearance is on par with his previous releases.  The color scheme is more akin to Cobra.  But, more on that in a later paragraph.  This Sonic Fighters Dialtone works well in a variety of vehicles and gives you a less bright version of the character for use in the field.  Original Dialtone gear isn't overly difficult to track down.  So, it's pretty easy to outfit him with the 1986 weapon and pack.  And, that leaves his other weapons for use with different figures.  The black grenade launcher is a nice match for the 1992 or 1993 Gung Ho.  And, I do enjoy the flamethrower with the 1994 Ice Cream Soldier.

So, now this 1990 Dialtone finds himself another option for me to use when a photo needs a communications trooper.  While I still don't like it as well as the original, that's also a function of the first release holding the childhood memories.  So, it's difficult to look at the Sonic Fighter through the lens of anything other than an adult collector.  But, in that vein, this blue and black Dialtone is a solid entry to the Joe world.  He meshes well with other figures.  He can be used in a variety of bases or vehicles.  And, he looks good when he's out and about in the wild.  You can't ask for much more from a figure.  I always find more value in the Dialtone character than most, just because of my childhood biases.  But, even with those brushed aside, the Sonic Fighters Dialtone is pretty decent.

The Sonic Fighters included a great deal of gear.  In addition to the massive sound producing backpack that was completed with a radar dish on top, Dialtone also included four weapons.  The additional gear was a cheap way for Hasbro to convey extra value beyond the sound backpack.  As the Sonic Fighters were higher priced, Hasbro needed to convince parents that these figures were really special.  Dialtone included a black versions of: his 1986 weapon, Blocker's pistol, Hardball's Grenade Launcher and Charbroil's flamethrower.  Many of the Sonic Fighters included recolored Battle Force 2000 weapons.  But, they also included many accessories from the 1988 and 1989 Night Force figures.  Dialtone's flamethrower is nearly indistinguishable from the 1989 Night Force Charbroil's.  And, there is considerable debate in the community regarding the differences between it as well as the Night Force Shockwave and Spearhead weapons that are included with other Sonic Fighters figures.

It was pointed out to me that Dialtone and the 1991 Interrogator share a color scheme.  The blue, black and grey of Dialtone is nearly identical to those colors on the Interrogator.  While Hasbro loved to reused the same colors again and again in the line, it was rare for two figures in close proximity to be so closely aligned.  There's no connection between the characters.  But, maybe there should be.  It would probably get super weird with one them wearing colors to mimic the other.  And, the stalker, obsessive nature of one of the characters would be out of depth with their established characterization.  Interrogator is smooth operator.  So, it doesn't flow that he's had some bizarre obsession with a random and somewhat obscure member of the Joe team.

The Sonic Fighters retailed for $7 each.  This was more than twice the cost of a standard carded figure.  But, while toys that make cheesy electronic noises are commonplace and cheap today, they were state of the art 31 years ago when this figure was released.  The size of the pack helped to sell the additional gimmick that more than doubled the cost of a figure.  But, the concept must have been successful enough as the Super Sonic Fighters and Talking Battle Commanders followed in subsequent years.  I did find remnants of the Talking Battle Commanders at retail in 1997.  So, it's probable that the higher price gimmicks did fizzle out, eventually.  But, Hasbro pushed the edge of what a 3 3/4" figure could be and found ways to make the figures evolve, even as they kept the construction and basic design of the figures the same for 13 years.

Dialtone has been done to death.  He was first released in 1986 and immediately got a Mission to Brazil repaint later in that year.  This Sonic Fighters figure appeared in 1990.  The 1986 Dialtone was released on a Chinese card around 1994.  Then, Hasbro went crazy.  After scrapping plans for a desert Dialtone in 1998, they released an olive green figure in 2000.  He appeared in the BJ's Gift Set in 2002.  His chest and arms were also released in grey as part of the 2002 Dusty figure and his parts ended up on a few other figures from the 2000's.  Then, a Tiger Force version was released in 2003.  Despite all this, Dialtone could have used both an arctic figure and a full production desert figure.  As I enjoy the mold, I'd take him in any colors.  But, I'm in the minority on that point.

Sonic Fighters Dial Tones are not expensive.  Just the figure can be had for under $7.  One with a couple of his weapons will run you $12 or so.  And, mint and complete with filecard figures can be had for $20.  For a figure with a lot of gear that was released in a lower production run subset, that's not too bad at all.  But, as this was the third Dialtone released in the vintage line, you can see how collectors were a bit fatigued with him.  And, while his colors are pretty strong, they are also not as distinctive as his 1986 releases.  The lack of a communications backpack is also a factor.  So, this Dial Tone languishes in obscurity, even as other figures released in his same subset find favor among collectors. 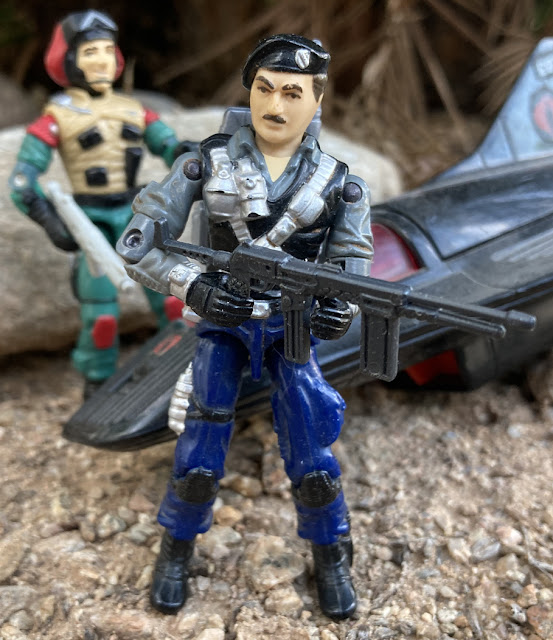 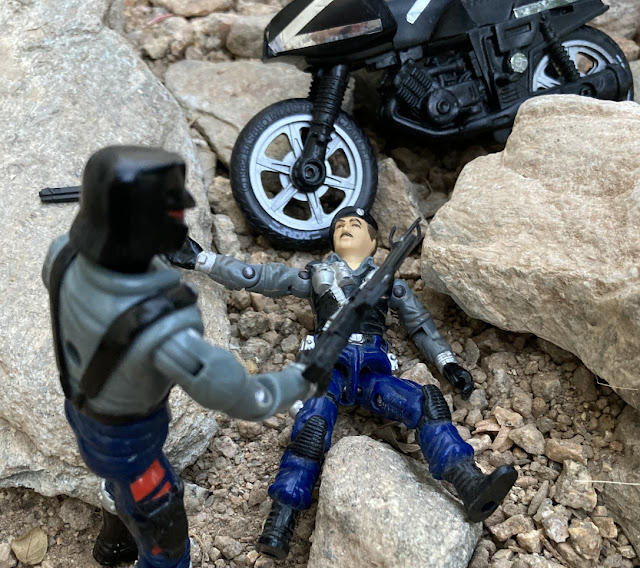 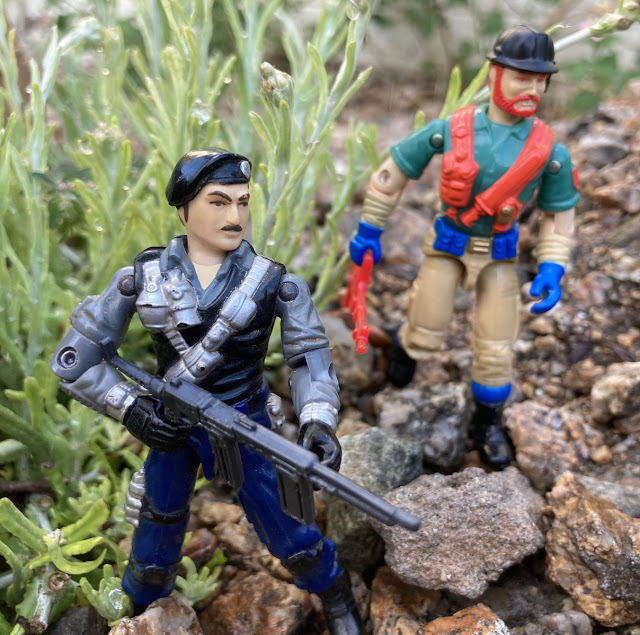 Posted by Robot_Sonic at 1:25 AM
Email ThisBlogThis!Share to TwitterShare to FacebookShare to Pinterest
Labels: 1990, Dial Tone, Dialtone, Super Sonic Fighters