There is Karma in the collecting world. The people who try to screw you over are usually fleshed out very quickly. The good guys, though, make themselves known from the first as well. I've bought and traded online since 1993. In all that time, with all the transactions I've conducted, I went until the Spring of 2000 (nearly 7 years) before someone screwed me. Perhaps I had a false sense of security after all my successful transactions. Maybe I wanted the deal to happen so badly that I ignored that little voice in your head that usually saves you from making mistakes. Whatever it was, in December of 1999, shortly after I opened this site and mentioned that I wanted a Viper Pilot, someone emailed me. They offered me a loose, mint, complete with filecard Viper Pilot for $25.00 shipped.

I felt this was a good price, but not out of whack enough to set off any alarms that this might not be true. I asked for a picture of the figure, and they came through. I checked Ebay for any auctions that might have been using the same picture they sent. I also checked YoJoe.com to see if there were any bad trader warnings about the seller. Alas, I found none. The deal seemed fine. I sent the money. They acknowledged that they recieved it. A week later, I had paid by check, they emailed me saying they had sent out the figure. 6 weeks passed. No figure. I emailed them and asked what had happened. The guy responded three or four days later to say that he had sent the figure to my old address that was on my check. (I had moved about a month before this transaction took place. However, I learned a valuable lesson. All checks I now send out have my old address scribbled out and the accompanying sheet I sent has my correct address, as well as the item description and price, highlighted in orange marker.) However, I had mail forwarding and was receiving all the mail that was being sent to my old address. I figured, okay, maybe it will take a little longer. 4 more weeks passed. Still no figure. I emailed them again. I never received any response. I am currently in the process of taking legal action against them. (One of the benefits of having attorneys as friends!) The bottom line is that I was not going to get this Viper Pilot. The thing that really cheesed me off, though, is that while I was waiting, a mint Viper Pilot sold on Ebay for under $10.00 because someone mislabeled it. I didn't bid on that figure since I figured I had one in the mail. Alas, the Viper Pilot was not to be....

Despite being screwed, I continued to trade online. In June of 2000, I acquired a lot from a collector. This lot is amazing. On top of the bucket of figures he sent, was the Viper Pilot. I nearly had a stroke. I truly believe that Karma works in the Joe world. I have talked about this to collectors before. Many of the good ones seem to think the same thing. If you hold yourself to a higher standard, it will always pay off in the end. At any rate, this is the end of my little morality tale. I will now focus on the task at hand, profiling the Viper Pilot.

In 1983, G.I. Joe took off. The line exploded past its shared mold beginnings and started blossoming into the fabulous toy line that inspires to this day. While most of the toys released in 1983 are awesome, there were two notable exceptions: the Falcon and Viper gliders. These fragile pieces of styrofoam crap were terrible. The didn't fly, broke easily, and weren't all that fun to begin with. The commercial showed kids throwing these things for yards upon yards. They had the gliders doing loop-de-loops. They looked like a great toy. When you got these things out of the box, if you could without breaking the fragile, compressed styrofoam wings, the lame toy couldn't hope to live up to its hype. The gliders wouldn't fly. They couldn't do loop-de-loops, and the figures would certainly not stay attached to their gliders like their commercial counterparts. The end result is that the Tan Grunt and the Viper Pilot usually took at least a couple of hard dives onto grass, rock, or pavement and were devastated as a result.

The basic blue Cobra mold is one of the best simple designs the line ever had. They were easily distinguishable as the enemy, came with cool accessories, and were faceless minions who didn't pigeon-hole the line into an easily stereotyped villain. The early days of the comic had all the Cobra specialty troops as variations of the basic blue uniform. If these figures ever become cheap again, I'd like to pick some up with which to customize many of those early specialty troopers. I think the primary reason G.I. Joe became the success it did, is because the the villain was so good. Cobra was the perfect enemy who was able to mirror Joes' moves. Many Cobra figures are still among the most popular figures of the line to this day. Cobra is just a good foil to Joe. They had dynamic personalities who were more interesting than the heroes'. Much like Milton's Satan from Paradise Lost, it is the evil characters who grab our attention. Sure, we root for the good guys, but the dynamic villain is why we watch. Without Cobra, there would not be G.I. Joe. I'm glad Hasbro seems to have realized that with their newly announced 2000 releases.

The primary reason I chose the Viper Pilot to showcase is that he is the most obscure of the three blue Cobras. I am very happy that we got basic Cobra blue Vipers in 1998, but they don't really satisfy my desire for more of these early figures. I always preferred the mold of the Cobra Trooper to that of the Officer. For some reason, I felt that a guy who has a gun on his chest, and comes with a sniper rifle would be a more elite soldier than some jobber with an AK-47. Of course, that is not how the hierarchy works, but I still use the Cobra Officers as cannon fodder while the Troopers are a bit more elite. Had I had a Viper Pilot when I was a kid, I'm sure I would have used him as the leader of the Cobra Troopers. Now that I have one, though, I just can't bring myself to use him. Most of my old blue Cobras are packed away. The later Vipers are just more fun for me to use. I've decided, though, that if I ever come across a Terrordrome, I am going to man it with original blue Cobras like they appeared in the early Terrordrome stories in the comic. I just think the base would look far cooler with tons of blue Cobras, blue Tele Vipers, and a few Crimson Guards milling about at the whim of an original battle helmet Cobra Commander.

Viper Pilots are very, very difficult to find, especially if you want one with a perfect Cobra symbol. I know my mother discouraged other parents from wasting money on the gliders. You can be sure she was not alone. The toys were so cheap and inferior that people just avoided them. Many people started with the Joe Falcon glider. Once they found out what a piece of rubbish it was, they never went back for the Viper Glider. That is why the Tan Grunts exist in a disproportionate number to the Viper Pilots to this day. Another reason is that the silver Cobra rubs off very easily. Once it is gone, the figure is indistinguishable from a normal Cobra Trooper. Many of the old, beat up Cobras that are missing logos were once pristine Viper Pilots. As such, finding a figure with a perfect logo is now nearly impossible. You will notice the extensive wear on the logo of my sample below. I was just happy to find one. Getting a perfect logoed sample will take some doing. Still, even figures like the one you see here command a premium. Many people are missing the Viper Pilot. He only appears for sale every so often. A figure like mine, which has some logo wear, but is otherwise perfect with very tight joints, will still run you over $20.00. Of course, the Cobra trooper and Officer are starting to reach that price level for loose, complete, mint samples themselves. As the entire genre of the old blues continues to gain in popularity and rise in price, expect the Viper pilot to lead the way in both price and scarcity. 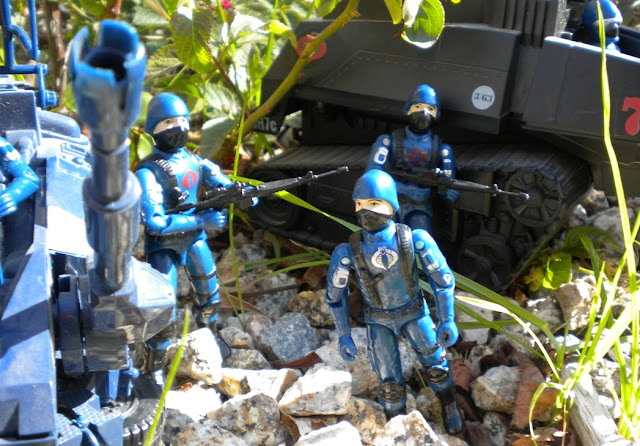