You know them.  I know them.  Everyone knows them.  The 2nd series of figures released by Plastirama in Argentina are, arguably, the most famous foreign rarities of all.  All of the 6 figures in the series are rare and very expensive.  Even today, the existence of carded figures other than Glenda remain rumors and speculation.  But, the figures themselves do now exist in enough quantity that anyone with the money can acquire them within a reasonable timeframe.

In 2001, Argentina went through an economic crisis.  One of the side effects of this, was that many enterprising Argentines discovered that they could sell G.I. Joe figures to Americans for very large sums of money.  So, as 2001 turned into 2002, tons of these figures (which, previously, had existed in quantities you could count on one hand) wafted into American and European collections.  Instead of lowering demand for the figures, though, the newfound availability brought the figures out of the shadows of the Joe world and gave them new prominence.  It lead to discoveries like the fact that Manleh included a parachute.  (Which was not known until that timeframe.)  Quickly, much was learned about the figures and they joined the general Joe lexicon.

Despite the cutesy mnemonic device that is "argen seven", there are really only 6 figures in the 2nd series.  (The 7th figure, Cobra Invasor was released in series 3 and is much easier to find and exists in greater quantities than the 2nd series figures.)  Here are each below:


Glenda
Glenda is a Scarlett repaint done in Argentina blue and chrome.  The head paint tends to be bad on all the figures.  She included a headset from Breaker and Flash's laser rifle.  As neither accessory fits on the figure, they were odd choices.  But, the blonde hair, striking blue base and the chrome highlights have made Glenda the second most famous figure in this series and a long time collector favorite. 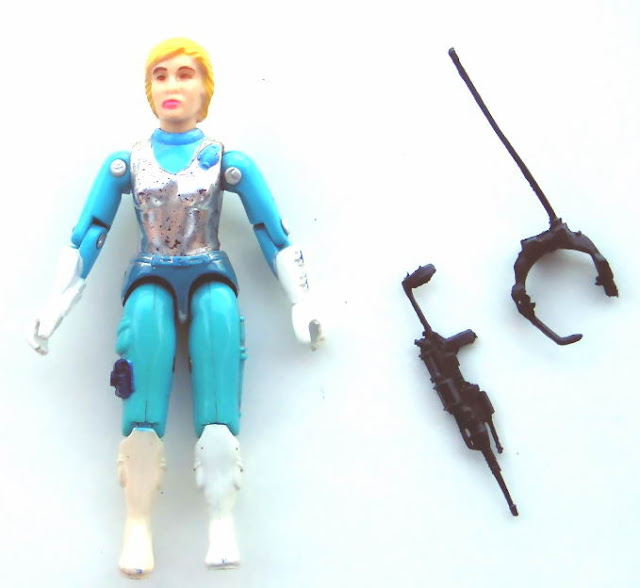 Arguably, the most famous foreign figure of them all, the Cobra Mortal remains the definitive holy grail of the Joe collecting world.  The economic crisis of the early 2000's in Argentina brought a lot of these figures to the market.  But, a lot was still a pretty small number overall.  Today, high quality samples of the Mortal sell for a couple of thousand dollars.  The figure was remade for the 2006 convention and has seen representations in the anniversary line as well.  The Mortal included Scarlett's crossbow.  (The Uzi  and ammo pack appear to be an incorrect inclusion in the photo.)  It is an odd choice for the figure.  But, adds to his overall bizarreness.  The mostly chrome body offset with red and black has become an iconic look for the Snake Eyes mold and the Plastirama Mortal is one of the most sought after figures from any toy line.

There is debate about the Cobra logo.  Some figures have been found without the logo.  It was initially believed that these were just samples where the logo rubbed off.  However, the abundance of them had lead to well founded speculation that the figure without a Cobra logo may be a legit variant of the Mortal. 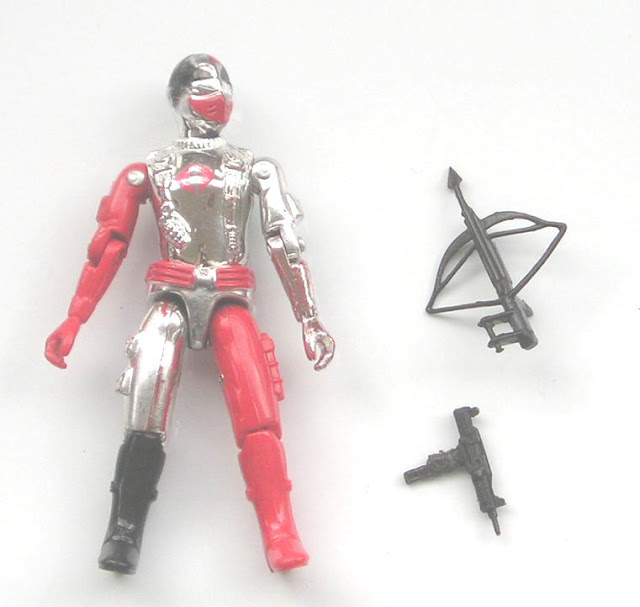 Manleh is a pretty drastic repaint of the classic Stalker mold.  First off, the figure is caucasian.  He is also colored in Argentina blue with yellow highlights.  For years, Manleh was actually harder to find than any other figure from his series.  In time, that evened out.  The figure includes an Uzi and a parachute.  The parachute was only discovered in the early 2000's.  But, it has become more available since then and complete Manlehs can be found. 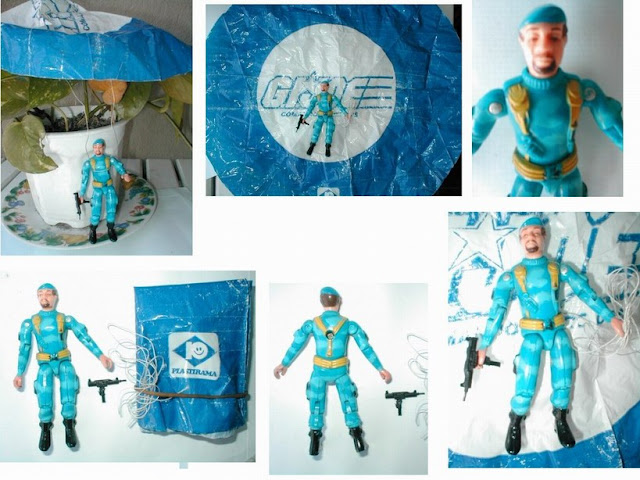 Redmack is a brown repaint of the 1982 Hawk figure.  This version, though, includes a brown helmet and backpack along with a version of Rock and Roll's M-60 and bi-pod.  The most interesting part of Redmack, though, is his card art.  The exclusive to Argentina painting clearly shows the character using the Zap/Short Fuse chest in lieu of the grenade/knife chest that was common to so many original figures.  This shows that Plastirama had a different idea for the Redmack figure that was changed rater late in the process.  It could be they needed the parts for other figures or made a mistake.  But, it gives Redmack something more interesting than just being a Hawk repaint. 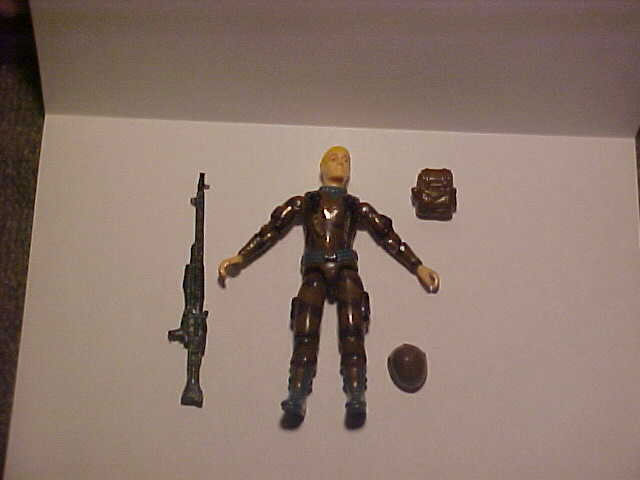 Shimik is an amalgamation of the Grunt/Grand Slam head with Rock and Roll's body.  The figure features dark skin as it's main differentiating point.  The overall look is excellent, though.  And, Shimik is easily on par with the more popular Mortal and Glenda figures in terms of a unique look.  To make you a bit sick to your stomach, though, this figure was not well regarded in the early 2000's when large quantities of him started appearing for sale.  Shimik figures sold as low as $17 for a few months.  That's hardly the case now.

While the sample below is pictured with an uzi, Shimik did not actually include that weapon.  Instead, he had a version of Stalker's M-32.  Along with that is a black backpack and helmet along with a version of Steeler's visor.  The visor is the interesting accessory.  Steeler showed up in Europe around 1984 and then appeared as a mail away in the U.S. after that.  But, this is the only evidence of him in South America.  It's possible that Hasbro sent the straight arm mold for Steeler to various South American Joe producers and they simply chose to not use it.  It could also be that Hasbro sent all the original 1982 accessory molds to South America and continued using duplicate molds for later Hasbro releases.  It's a great unknown.  But, seeing the visor here raises questions of what other molds were sent to Estrela and Plastirama. 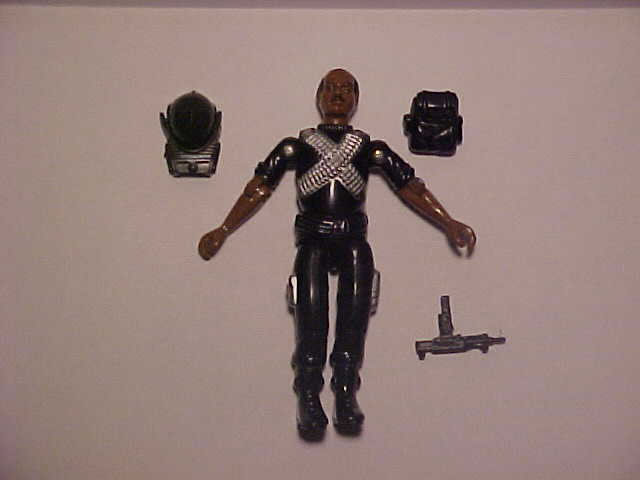 The Topson figure is somewhat problematic.  The figure is a great repaint of Breaker of long sleeve arms.  He includes a grey helmet and a grey version of Grunt's backpack.  You see quite a few pictures out there of Topson with a grey version of Blowtorch's helmet, too.  However, that helmet was released in grey in the U.S. and is quite common.  There is no evidence that the Blowtorch helmet survived to Brazil, Mexico or Argentina as all the Blowtorch figure molds from these countries are either repainted 1982 helmets or repainted Doc helmets.  We've never seen a carded Topson, so anything is possible.  But, the timeline of accessories the disappearance of the helmet mold on figures with whom it's release make sense lends a great deal of skepticism to that helmet having been released in South America.  So, buyer beware if you see one with a Blowtorch helmet.

As if that's not enough, the figure also likely included a small phone/remote control.  This appears to be the remove from the Flamethrower Pac Rat.  It is, of course, often missing from the Topson figure.  On his card art, Topson is actually seen with a Snake Eyes ammo bag with an antenna sticking out of the top.  It's odd, to say the least.  But, all this makes finding a complete Topson the most daunting of the 6 figures in the series. 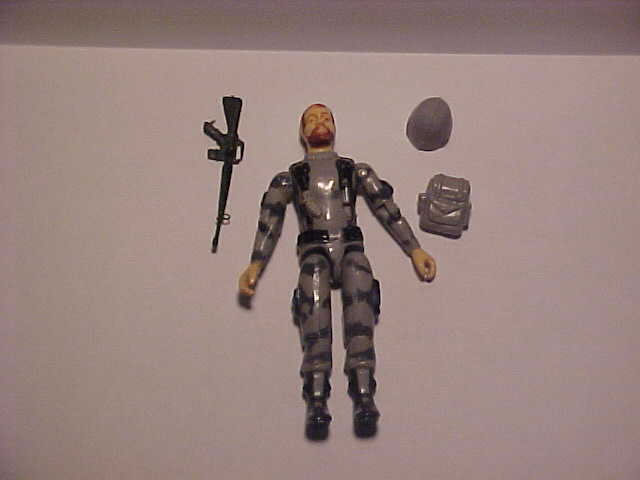 Here's a group photo of some other samples.  The second photo is likely the best example of the actual accessories that were included with the figures.  But, until we find carded samples, it's impossible to know for sure exactly what gear each character included. 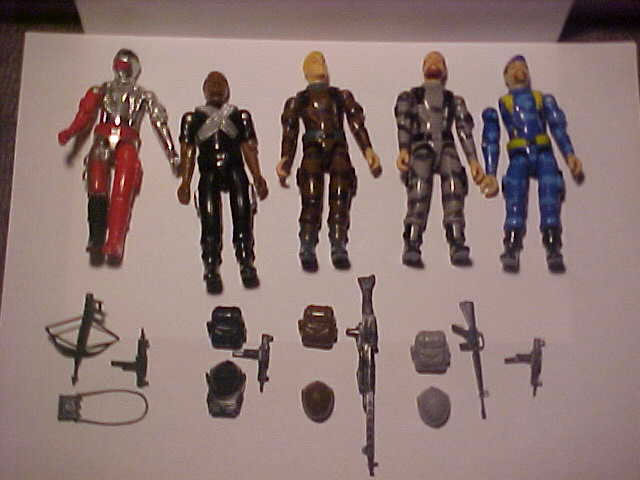 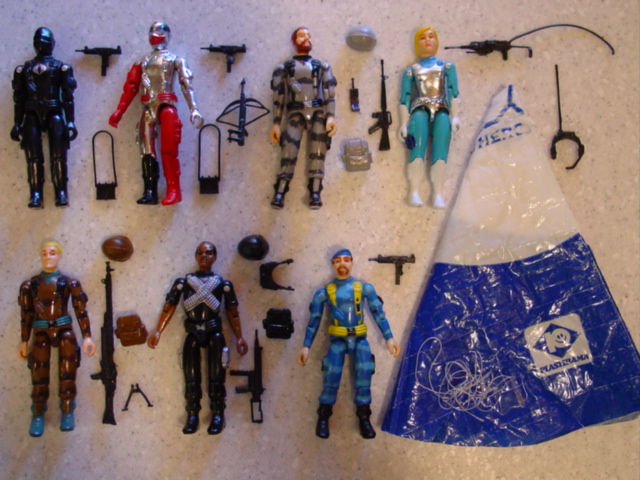