We have learned that the Joe figures from the 2000's often went through several stages of almost production before the final color samples received sign off and went into full production for retail release.  Many of those samples have given collectors some amazing variants to track down.  The convention figure release of that time, though, underwent similar processes.  The overstock, though, was usually harder to find (a by-product of the low production runs) and not often drastically different from the actual figures released.  Below, though, you'll see some of the 2003 Convention figures in their pre-production state.

The Lady Jaye and Falcon figure are drastically different from the release figures.  The most interesting part of this figure is that Lady Jaye very nearly matches the hand painted mocks ups that were proposed for the 1997 Lady Jaye figure.  (She's also close to the Volga figure.)  The Major Storm figures are pretty close to the production colors: as is the Black Dragon Trooper figure.  You'll note the green helmets and black weapons for Major Storm.  The production figure included golden accessories very similar to his vintage versions.  It appears that the original intent may have been to differentiate his modern updates from the 1990 versions.

The most interesting part of this photo is the golden Crankcase rifle.  This weapon was never released by Hasbro in the 2000's and it's appearance raises questions.  The obvious answer, though is that Major Storm uses the waist and legs from Crankcase.  Also, in 2004, Hasbro released a product description for an AWE Striker with Crank.  Crank ended up being a re-release of the 2002 Dial Tone figure.  The product description showed that Crankcase was, at least, considered for release.  But, this gun is just more evidence that Hasbro had access to parts of the 1985 Crankcase mold.  The fact that it never appeared is just another example of how Hasbro wasted slots on poor figures and cost collectors something more interesting.  Why Master Collector chose to not use this weapon is a mystery. 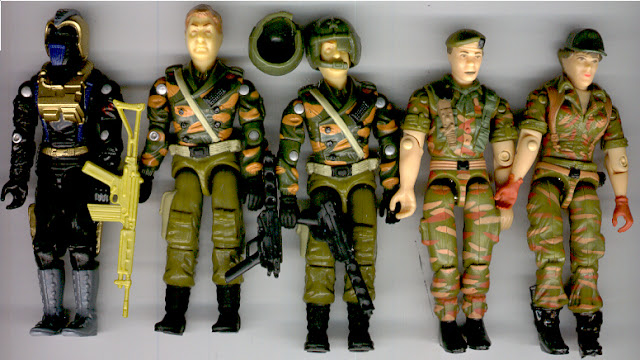