As 1988 wound down, Hasbro produced a few special figure releases that were repacks of some of their 1988 figure offerings.  These special packs were marketing gimmicks to entice gift givers to choose something G.I. Joe for their recipients.  There was a special Voltar vs. Muskrat pack that featured exclusive packaging.  The option that is most familiar to me, though, is the Target exclusive Parachute Pack Hit and Run figure.

This exclusive showed up at some point in 1988.  The Hit and Run figure itself was no different than the standard version that was still available on a single card.  In addition to his traditional accessories, though, the figure also included Parachute Pack that was taken from the same mold as the long time mail away premium.

MOC, this figure is rather hard to find and extremely expensive.  Loose, the figure is easily made from a Hit and Run and common Parachute Pack.  (There are, though, differences in the parachute pack with one made in China and one made in Hong Kong.  It's possible that one of these is either exclusive to this Hit and Run or that Hit and Run only included one of the chutes but the chute was also available as a mail away.  I've never seen a carded version of this figure with the chute packaged so you can see the made in stamp and no one is going to open a $1,000 carded figure to find out something so trivial.)  So, you don't often see the figure command a premium.  But, the cardback did include a unique, orange backed filecard.  You will see this exclusive bio sell for substantially more than all but the rarest filecards in the line.

Hit and Run was one of the last figures I purchased at retail in early 1988 before I quit collecting Joe.  However, my youngest brother continued buying figures through the year.  And, at some point, he acquired this figure.  I remember as I found the Hit and Run lying around the house and I thought he had stolen mine from the closet in my room again.  However, I found mine safe in his plastic baggie inside a Lego container on the floor.  I then found the packaging for this figure and realized he was something different.

For some reason, I had not saved the filecards from my 1988 figure purchases.  (Still don't know why that was since I had been religious about filecard clipping since 1983.)  So, I cut the orange file card off of the packaging and added it to my Hit and Run that was saved away.  That proved fortuitous in later years when the filecard got scarce and pricey since I already had one.

Hasbro didn't really do re-releases like this Hit and Run again.  Any later special offers were packaged with an exclusive figure to make them more enticing.  But, this figure serves as a somewhat pre-cursor to Sky Patrol who would debut two years later.  It is also an excellent pairing of figure and gear that Hasbro would move away from as the line sputtered out. 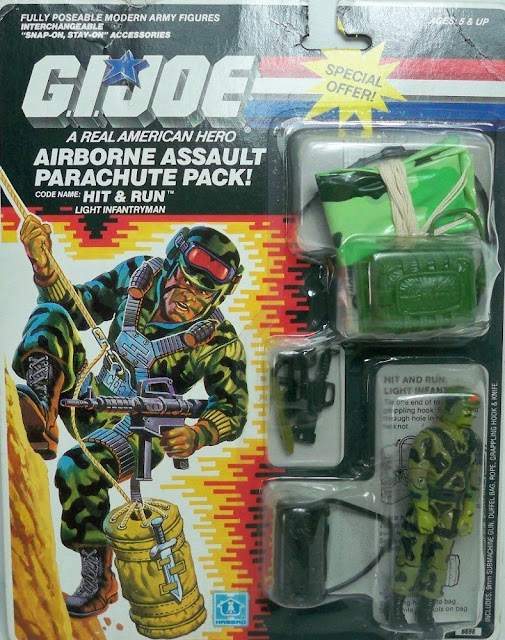 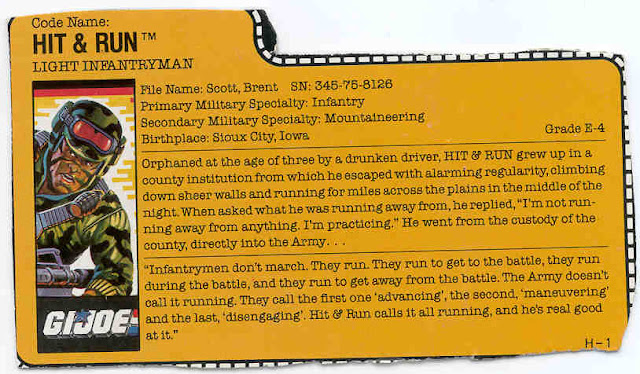 Posted by Robot_Sonic at 2:00 AM
Email ThisBlogThis!Share to TwitterShare to FacebookShare to Pinterest
Labels: 1988, Hit and Run, Parachute Pack, Rarities, Retailer Exclusive