The 1982 Joe toys were amazing.  They brought a level of detail and play-ability that surpassed even the Star Wars toys of the era.  But, 1983 was even better.  Joe got a Headquarters, attack helicopter and fighter jet.  Cobra got its first vehicles, too, putting them more on par with Joe as an enemy.  While most of the toys of that year are iconic, the Cobra FANG was a release that simply never clicked with me.  It may have been that I wanted too much out of a cheap release.  Or, I just had back luck with a single poor quality version.  But, as a kid, the FANG was the one vehicle from 1983 (aside from the gliders) that didn't really resonate with me.  It couldn't hold a candle to the Dragonfly or Skystriker and didn't include a unique pilot.  In short, it lacked the defining features that set apart something like the Hiss Tank.

But, the FANG has taken on new significance to me as an adult collector.  I didn't much care for the FANG as a kid.  I found that it was too flimsy.  The missiles always fell off when you played with it.  And, the overly exposed pilot was too easy a target for the Joes.  It had no place for a figure's accessories while they flew it.  And, the pilot didn't stick into the cockpit all that securely and the figure flying the FANG would often fall out when performing the most basic of kid maneuvers.  So, the FANG got relatively little use.  But, now, the FANG has all the hallmarks of classic Cobra vehicles.  It fits perfectly with the Hiss Tank, Rattler and Stinger.  In short, it's classic Cobra.  So, for that reason alone, I re-examined my dislike of the FANG and found some value in it.

My only real childhood memory of the FANG is also one of the reasons why I've dismissed it through the years.  In the late summer of 1983, a friend around the block had most of the new Joe toys.  Among them were the FANG, Major Bludd and Destro.  One day, the FANG grabbed my interest.  I don't recall which of the 2 aforementioned figures I had as the pilot of copter.  But, whichever it was, I placed his pistol into the cockpit by the figure's feet.  At one point, playing on the sidewalk that bordered the driveway, I had the FANG perform a maneuver and the pistol fell out into the tall grass.  My friend was, naturally, upset.  And, I spent what seemed like hours (it was probably only a few minutes.) combing the grass until I found the missing pistol.  At that moment, the FANG became worthless to me.

My younger brother would get a FANG for his birthday a couple of months later.  But, as I had purchased the Dragonfly before the FANG arrived into our house, I had almost no interest in such a basic toy.  The Dragonfly was infinitely better.  I had a few battles here and there between the two.  But, the FANG missiles were always a hassle and I ended up abandoning most air to air combat scenarios as they weren't all that much to play out.  The FANG remained in our toy room where, eventually, the rotor blades broke off and the skids were cracked.  It was never replaced and remained a ghost in boxes of broken Joe toys until 2003 when I finally tossed a bunch of my broken vehicles that were beyond salvage.  Even the Sears  Dreadnok FANG (which my brother got for Christmas in 1986) fell apart quickly and really had no place in my play patterns.

And, so, the FANG became a forgotten element of Joe for me.  I liked the way the FANGs were used in issue #30 of the comic.  I always thought it odd that the FANGs were referred to as SNAP helicopters.  The FANG had been out for over a year and a half at that point and even appeared in the comic several times.  It was a silly error that still bugs me to this day.  But, not even those printed adventures were enough to gain the FANG prominence in my collection.  Even as an adult collector, that bias lingered and the FANG was never a target for my acquisitions.  Now, though, I have more of a collecting focus on pre-1985 Joe offerings since those were the prime childhood years that drove my love for the franchise.  That moved the FANG back into focus.  But, never enough for me to seriously hunt one down.  Now that I have one, though, I appreciate it much more.  I like it as a venue for the Viper Pilot since the Viper Glider is a piece of junk.

The FANG has some decent display elements since the pilot is completely exposed.  (A hallmark of Cobra vehicles.  They must have hated their drivers/pilots.)  This allows for the display of a figure.  And, the skids hold two figures on foot pegs.  So, you can display some additional figures along with the pilot.  And, the FANG doesn't have a huge footprint if you position the rotor to be parallel with the FANG's body.  So, it's display to space ratio is pretty cool.  It has classic Cobra colors that complement the early Cobra figures, too.  In short, as a collector piece, the FANG succeeds despite the failings I found in it as a toy.

The FANG is actually quite brittle.  It also has some easily lost and broken pieces.  The fact that it's still so cheap suggests that a lot of them were made and, despite all the issues, a ton made it to the collecting world.  The FANG missiles never stayed on well for me.  But, they are large and bright.  So, neither they nor the bomb are really difficult to find.  The rotors do tend to break off.  Once that happens, there's no salvaging the victim.  The real bugger on this vehicle is the engine cover.  It is the most often missing piece.  And, the little tabs that hold it in place are easily broken.  So, finding a mint engine cover can be frustrating.  I'd like to say the engine cover doesn't matter much.  But, the red color helps break up the grey and black on the copter's backside and is a welcome visual diversion.  Of course, you'll notice that my FANG is stripped down.  I have the parts somewhere.  I just don't know where.  Hopefully, they'll show up some time this summer as I clean out more boxes.

Hasbro released the FANG in 1983 and then repainted it in the Sears Exclusive Dreadnok Sets in 1986.  After that, the mold was done in the U.S.  However, the FANG saw extensive life as an international release.  Repackaged FANGs were sold in Europe and Japan.  Exclusive FANGs were released in both Brazil and in India.  In fact, Funskool was shipping the FANG into the early 2000's.  Hasbro resculpted the FANG in the late 2000's and released in colors also reminiscent of the original.  Despite all these releases, though, the international versions were essentially the same as the American release.  So, there's lots to buy if you are a FANG collector.  But, the looses versions don't bring a great deal of diversity to a collection.

Dealers will sell mint and complete with blueprints FANGs in the $30 range.  With a little looking, you can get them for 1/2 that: especially if you are willing to buy several of them at once.  Incomplete, the copters can be had for under $10.  But, the missiles, bomb and, especially, the engine cover will set you back quite a bit more.  The real issue is the shipping.  The large rotor blades require the FANG to be shipped in larger boxes: adding to the price.  So, the best deals are local ones where shipping can be avoided.

Now, I have a FANG.  It's nice to have it among the early Cobra vehicles and figures as it fits them so well.  But, I don't see a need to build an army of them and I don't really foresee my general feelings on the FANG changing all that much.  I appreciate the copter for what it is and understand why many collectors love it so much.  But, I see limitations that are leftovers from childhood memories.  That's a powerful force for a toy to overcome: especially when the line is as vast as the Joe line is.  There's so many more toys that I find cooler and more fun to own.  But, this FANG was there in my Joe infancy.  So, good or bad, that carries some nostalgic value.  I can't see the vehicle without thinking of that fall day where the gun fell from the cockpit.  That reminds of the climbing tree in that old front yard and all the fun times we had there.  I guess that makes this FANG more valuable than I had given it credit for. 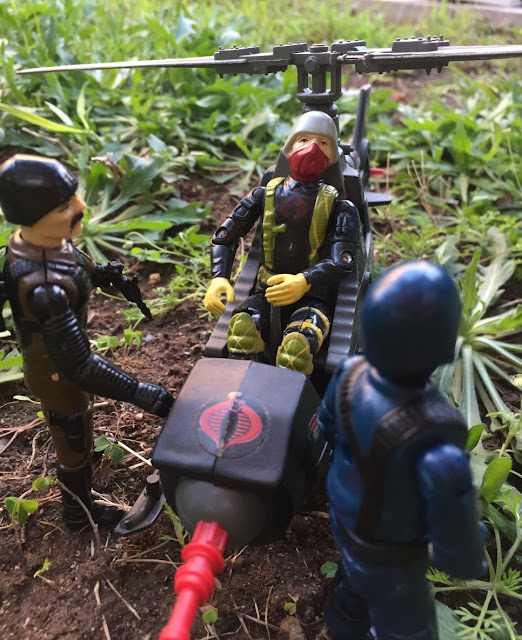 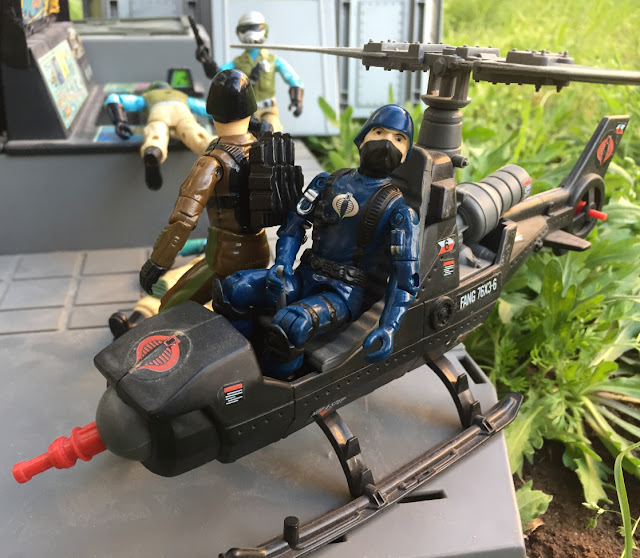 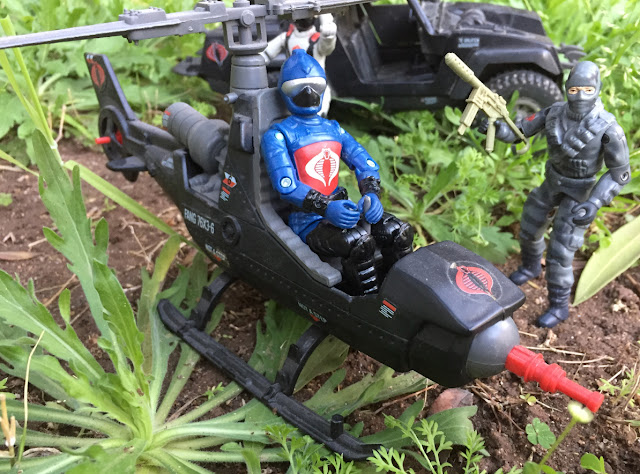 Posted by Robot_Sonic at 1:05 AM
Email ThisBlogThis!Share to TwitterShare to FacebookShare to Pinterest
Labels: 1983, FANG, Vehicles