I bought a lot of "original" collections in the late 1990's and early 2000's.  These were lots of figures and vehicles that were sold by the childhood owners of the toys rather than collectors or dealers.  As such, it was easier to identify which figures were rare and which were just popular.  Now, you see a great number of lots that are designed to look like childhood collections.  But, they are often stripped of all but the least popular army builders and the major characters like Snake Eyes, Cobra Commander and Stormshadow are noticeably absent.

20 years ago, though, these lots were full of the army builders and major characters alike that collectors enjoy.  Aside from being able to use condition to determine which figures were favorites of the person from whom the collection was acquired, I was also able to get an idea of what figures were simply rare.  In my time buying, I never found a Payload, AVAC or Hardtop in a lot.  I found at least three Stardusters, a pair of Rumblers and an occasional Night Force figure, though.  One figure I never got in any lot, though, was the Steel Brigade.  This is somewhat odd as Steel Brigade figures (all versions except for the Gold Head) were relatively common back then.  Bagged version D figures with the recolored Recoil rifle sat unsold for $10 on Ebay.  If you wanted to build a quick army, you could do it for under $100.  But, I still never found the figure in any lot.

In the ensuing decades, though, Steel Brigade figures have gotten hot.  The overstock that was ubiquitous in the early 2000's is long gone and the reduced availability of the figure has lead all versions to be $40+ figures.  That's a tremendous amount for an army builder.  And, it made it difficult to amass large quantities of Steel Brigades.  In early 2017, though, factory custom makers rectified this situation.  In short order, a large number of Steel Brigade figures began to appear on the market.  There were desert, arctic, Sky Patrol, Night Force and Gold Headed versions.  And, there was also a large number of figures that were based on the classic color scheme that were offered to collectors for prices that were attractive to army builders.

I view this figure as the "Estrela" Steel Brigade.  The green color of the jacket and the beige of the arms reminds me of colors that Estrela used in the Brazilian G.I. Joe line.  And, while they never actually released a Steel Brigade figure, I could envisage them having used colors like those chosen by Black Major if they had done so.  The slightly different colors make it obvious that this is a factory custom figure.  The accessories are also different enough that even a novice would notice that the color, feel and sound of the gear is substantially different from that of vintage Joe accessories.  This helps collectors feel that their precious originals are retaining their value but also offering everyone who either hasn't had the fortune of collecting for two decades or had a massive toy budget to also enjoy some decent figures.

If you've spent any time perusing the photos on this site, you'll often see Steel Brigade figures in precarious situations.  Usually, they have been soundly defeated and are either posed as dead or about to be killed in terrible ways by Cobra forces.  There are some reasons for this.  The first is personal and is a subtle way to complain about how a certain segment of fandom has actively worked to shape the hobby to their own, selfish reasons rather than what the good of the hobby as a whole.  But, the bigger reason is not related to this old grudge at all.  For me, Cobra needed to be a credible threat.  If they always lost, why would anyone take them seriously?  For an elite team like G.I. Joe to be singularly focused on stopping Cobra, the enemy organization had to be a real threat.  Having Cobra defeat Joes, though, if problematic.  While the Joe team seems large, even a few defeats resulting in death quickly diminish not just the Joe roster but also their level of eliteness.  The Steel Brigade solves this dilemma.

I've always seen the Joe team as one of three entities set up by Generals Flagg and Austin in the late 1970's to not only combat America's enemies, but also groom military officers for political office.  The original plan was for the first group to handle international threats.  The second group, G.I. Joe, would handle domestic problems.  The third group, the Steel Brigade, would support both groups in their operations and provide a breeding ground for new recruits and replacements to the other, more elite teams.  But, things don't always go as planned.  G.I. Joe responded to Cobra and ended up chasing them around the world.  The first group became more covert and dabbled in international issues, often as anonymous aid to foreign powers who were either friendly to the U.S. or who had an objective that the U.S. happened to agree with at the time.  The Steel Brigade ended up getting drawn into both factions.  But, due to some terrible leadership among their ranks, were forever barred from getting promoted into a full member of either of the elite units.  Still, the Steel Brigade maintained their level of prestige and were a destination for many troopers who were excellent but not quite elite.  As such, they are capable of defeating Cobra, especially newer recruits.  But, they are also often bested by more experienced Cobras or better trained Cobra specialties.

All of this provides an elaborate setup where I get to use the figures in a variety of ways.  I've always felt the Steel Brigade figure was very cool and worthy of his popularity.  I have always used Joe aligned army builders.  And, finally having Steel Brigade figures made it easier to represent this fact in photos and dioramas.  Being able to finally acquire some cheap versions based on vintage coloring as well as some additional paint jobs has been a great way to grow my collection and give Cobra a fairer fight.  If the Joes capture Cobras, they have to take them into custody and let them stand trial, get convicted and go to federal prison.  Cobra, though, can point a bazooka at a guy strapped to a tire and blow him up.  They just can't, though, do this to Roadblock, Flint or other characters.  So, the Steel Brigade will continue to find terrible fates at the hands of the bad guys.  Occasionally, they'll win one, too.  But, the Steel Brigade opens up more possibilities for story telling and photo taking.  So, that's worth their price right there.

This Steel Brigade version featured a great deal for your money.  In addition to the classic "Duke" chest version of the character, each figure also included an "Airborne" chest so you could build and army of Version A Steel Brigade figures.  Each figure included the requisite backpack in green.  They also included two rifles: a dark black Airborne rifle and a dark black Recoil rifle.  The Recoil rifles were welcome additions to the collecting world as they offered a cheap and properly colored alternative to one of the best weapon molds of the vintage Joe line.  And, you're still left with a spare rifle should you use the Recoil weapon for another Joe.

The Steel Brigade figures started their life off at around $12 per figure, $10 per figure if you bought larger lots.  By Christmas of 2017, though, you could get them for around $7 each.  At that price, they didn't last long.  Now, almost two years after their release, the lots of 5 Steel Brigade figures are gone and you'll see individuals sold between the $15 and $20 range.  At $12, these guys were a novelty.  At $7, they were a must buy.  But, at $20, I'd skip them and just save up to buy an original Steel Brigade.  Oddly, many of the differently colored Steel Brigade figures remain cheaper than original pricing.  But, those based on the Gold Head colors and the original colors have retained their popularity.  But, this makes sense since the figures are excellent army builders, hearken back to the vintage line and are close enough for many collectors to find useful. 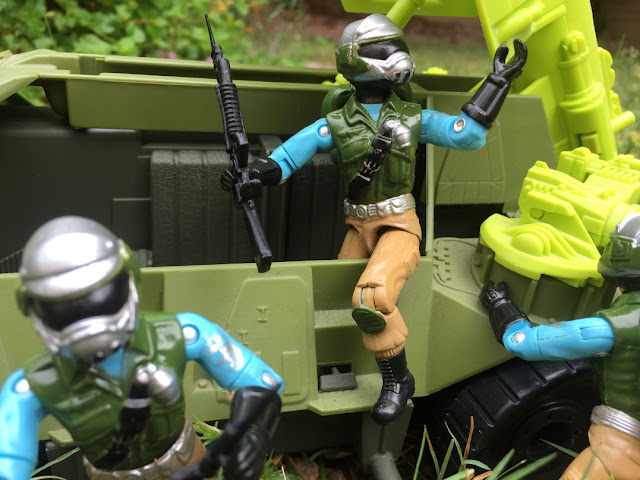 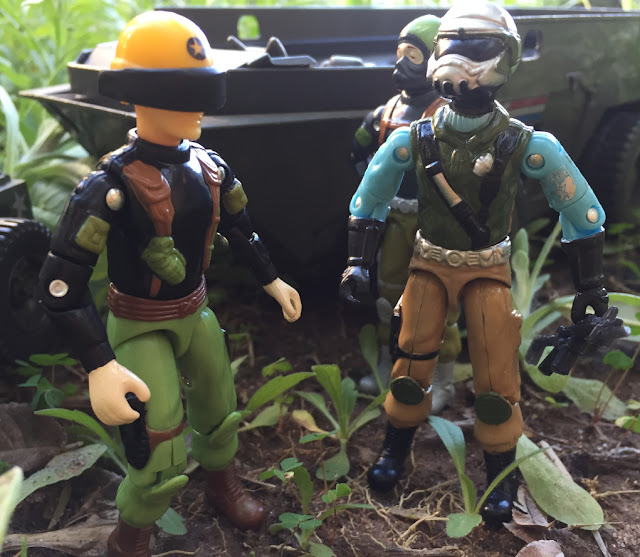 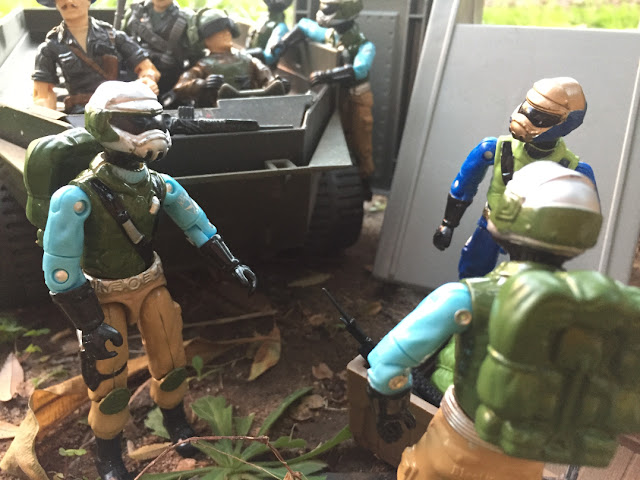