2006 was not a good time to be a Joe fan.  In a lot of ways, it was like 1995.  A great run of toys had pitifully ended at retail while the product that comprised the late years was actually quite good.  There was little hope on the horizon for the line and the interest in the property was quickly fading away.  The thing is, the few releases that are actually considered 2006 items are quite good.  In many cases, they are step above the insufficient 2005 retail toys and bring some nice additions to a collection.  In a few cases, Hasbro trotted out some tired, recently used molds.  But, with minor adjustments, they created a solid update to something that could have been bland.  A perfect example is the 2006 Gas Mask Trooper.

Hasbro made a lot of weird decisions in the 2000's.  They would not remake a highly requested figure like the 1985 Snake Eyes or 1983 Cobra Commander.  Yet, they had the budget to make Mutt and recast parts for Scrap Iron.  They also, somehow, had budget to make a new Lady Jaye mold, even though the original had been proved useful as recently as 2003.  But, mostly, Hasbro liked to make new heads.  They were cheaper than other parts.  But, most of Hasbro's attempts at new heads left much to be desired.  Finally, in 2006, a new head appeared on an army builder.  With no face to sculpt, the result was pretty decent.  And, this Gas Mask Trooper can now easily integrate into many Cobra armies.

The origin of this figure is just a single panel in issue #44 of the Marvel Comic.  It seems disingenuous that the issue that introduced Airtight, the Mauler, Dr. Mindbender and the BATs would pick a character from one panel to become a figure.  But, this was all about cost.  And, the figure's body was available, had already been recently released in the base color and was going to be packed two per pack to further reduce the overall expense in making the pack.  Plus, the other molds were long gone and Hasbro didn't spend any money or time looking for molds when the line was at its peak.  So, there was no chance of any of the newly introduced characters joining Lady Jaye in the pack.

Collectors began demanding a new Cobra Trooper in 2000.  It seemed an obvious choice for a fledgling line.  The chorus grew louder in 2001 as Hasbro ignored the whims of army builders.  It was not until 2004 that a Cobra Trooper and Officer based on the original look finally appeared.  Collectors assumed Hasbro would repaint the molds ad naseum.  But, that didn't happen.  A few months after the release of the 2004 Infantry Pack, the Cobra Trooper (now sporting his original head and crappy arms) appeared in a comic pack.  The Officer appeared in the next wave.  The molds would only appear once again, in the Night Watch set.  I never liked the Comic Pack Cobra Trooper.  His poor gear and flesh colored hands never did anything for me.  However, I really liked the 2004 Comic Pack Cobra Officer.  While he's basically the same color as the Trooper, the included Red Star AK-47 and gloved hands made all the difference.  I picked up a few of them on clearance and had them as a backup army when I wanted something different for a photo.  When these Gas Mask Troopers were released, I found they were exact matches for the Comic Pack Officer in color.  And, they also included the AK-47.  So, I quickly supplemented my Officers with Gas Mask Troopers and had a formidable force with relatively little effort.  While the Gas Mask Trooper lacks the painted gloves of the Officer, he does not have flesh colored hands and that makes all the difference to me with this mold.

While the Gas Mask Trooper was never repainted, his legacy was continued.  In 2007, Hasbro released an anniversary figure named the Cobra Air Trooper.  At his core, this was a repainted Cobra Trooper.  But, he included a jet pack blatantly ripped off from the JUMP.  The additional headgear given to this figure to protect his brain was a dead ringer for the Gas Mask Trooper.  In the early 2010's, a design based on this head began to appear on Black Major factory custom figures.  Sadly, this head was mostly used on straight arm Grand Slam bodies to make armies for the Cobra De Aco.  The designs are great and the figures look amazing.  But, without swivel arms, the figures are very limited.  While these figures have dried up from their release, you can still find many of them for about their original price since they have not proven as desirable as the early Cobra Trooper and Crimson Guard repaints from the same timeframe.  A few of the heads have appeared on later factory customs.  So, the head being out there means there are options for you and you can get it an variety of colors, now, for customizing needs.

The Gas Mask Trooper's accessories were good and bad.  The bad was yet another Baroness rifle at a time when collectors had, literally, hundreds of them lying around.  The good, though, was the inclusion of the Red Star AK-47.  This weapon hearkened back to the original Cobra Officer and is a weapon I associate with Cobra.  With the figure's helmet, though, I also like to outfit him with various other gear that was included with other releases of that time.  My favorite combo is the black version of the 1991 Sci Fi's weapons that were first included with the 2001 Laser Viper.  Those accessories look good with the Gas Mask Trooper.  The bulkier head is really accented well when the figure wears a pack.  So, I go out of my way to find decent looking ones for my extra Gas Mask Troopers.

At the time, this pack was a dud.  You wonder how a set with a new Lady Jaye (the first hatless version!) and two classically inspired army builders could collect dust.  But, Joe fans pretty much abandoned the brand in 2005.  A series of bad decisions by Hasbro and the club left the small fan base fractured and beaten down.  And, with that, most of the new collectors who onboarded in 2000 through 2002 were gone.  So, the little product that got to retail sat and sat.  Eventually, this comic pack was heavily discounted.  I picked up a few for $5 or $6 each after shipping.  A lot of collectors bought some clearance packs to get extra Lady Jayes for parts.  And, they were then able to sell off the Gas Mask Troopers for a couple bucks each to cover their costs.  If that weren't enough, overstock Gas Mask Troopers were available in large lots from Asian Joe sellers.  All this added up to surplus figures that not even massive army builders could absorb.

Today, the figure remains relatively unloved and you can get mint and complete versions for about $6.  Dealers will sell the figures for $15...which is ridiculous since you can get a MOC pack with two Troopers and Lady Jaye for around $20.  But, like most of the 2000's era army builders, this guy is not nearly as ubiquitous as he used to be and it might take you a year or more to finally build a large army.  I still find him one of the better figures just because he was something slightly different.  I'm glad I was able to build up an army of them as they are a great supplement to 2000's era Cobra forces.  They are not perfect figures.  But, few releases from their era are.  In this day and age where there, again, is no prospect of retail Joe figures on the horizon, I'm reminded of 12 years prior, as the line died again in front of collectors' eyes, with nothing they could do to stop it.  Those memories that are associated with this figure keep him more prominent than many of his contemporaries for me.  The fact that he's a good design is just icing on the cake. 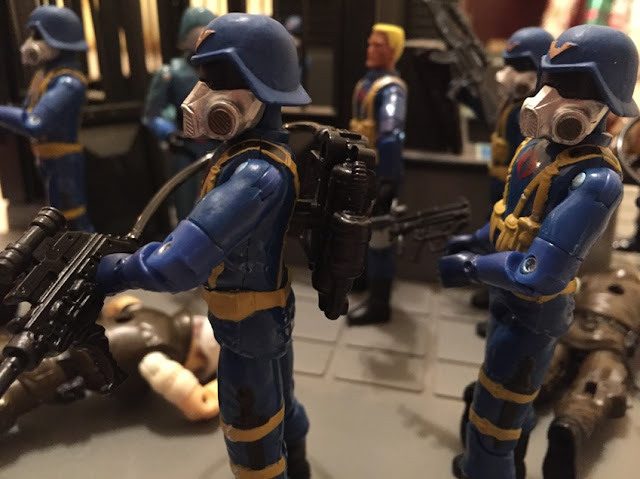