The Heavy Artillery Laser, or HAL, was released in the first wave of G.I. Joe figures in 1982.  It was a huge, towable laser cannon that included the Grand Slam figure.  It was the perfect blend of absolute science fiction and realistic military.  Hasbro milked the mold in '82 and '83 and sold a LOT of toys.  Around 1984, Hasbro gave the molds to Palitoy where they could recolor some classic Joe molds into exclusive colors and incorporate them into the Action Force toy line ahead of that line's transition to classic, standard G.I. Joe releases.  The line featured a small run of repaints of the American molds for figures and vehicles.  All were interesting and different from what you could get in the U.S.  One of the most interesting, though, was the Laser Exterminator.  It is a red and black repaint of the HAL that was changed to the Red Shadow affiliation.

The Red Shadows were the enemy of Action Force.  At their core, they retained the elements of Cobra.  But, to be fair, the elements of Cobra are the essence of every fictional villainous group that's been created since World War II.  They were dangerous and had really cool uniforms with a skull and crossbones logo.  As Palitoy moved away from the Action Force concept and adopted G.I. Joe, though, these managed to release a few Hasbro molds as Action Force toys.  This is important as it created a tie to the two lines.  Had Action Force never had the Joe figures and just been the 5 points of articulation figures and some vehicles, it's doubtful that American collectors would have paid it much heed.  But, with the last wave inclusion of Hasbro figures, the lines were forever intertwined and collectors have clamored for more Action Force items ever since.

As a toy, the Laser Exterminator made much more sense as a weapon of the villains.  It was high tech, highly impractical and completely out of character for a conventional military force.  As the byproduct of a Japanese technical wizard, though, the Laser Exterminator took on a much more useful role.  It was the domain of an evil genius rather than overzealous government weapons contracts.  Cobra always had that element of super-villainy and the Red Shadows featured that, too.  In the early days of the G.I. Joe line, Joe had all the best equipment.  If you're looking for the really science fiction-y stuff, it was mostly on the Joe side.  (The SNAKE armor was the most "out there" concept on the Cobra side for a while.)  Joe had individual jet packs, soldiers carrying laser rifles on their backs and a towable laser cannon.  Cobra was a bit more grounded with their equipment, even if their main characters were super villain clones as opposed to the plain Jane G.I. Joes of the first year.

But, like any good enemy organization, Cobra had to evolve.  They became more science fiction than fact because that's what good villains do.  In order to maintain their threat, Cobra needed to be able to bend the edges of reality.  In this realm, the Laser Exterminator is a perfect fit.  The practicality of a laser cannon is rather debatable.  Especially, one that elevates.  It would have to hit an aircraft in flight.  (Though, the speed of a laser would likely allow that, assuming the sighting system is good enough.)  It's kind of funny to re-read G.I. Joe #1 now and see the HAL taking out tanks on the ground.  The cannon would have to have a clear shot.  Which, for a weapon that requires another vehicle to tow it, would lead to a short field life.  But, the HAL remains a fun toy.  And, that is where the value in the design lies.  But, a super impractical, overly engineered laser weapon is exactly what I'd expect from a villainous organization that wears bright red uniforms and has a skull and crossbones as its logo.

My brother got the HAL for his epic birthday in 1982.  In fact, he got a couple of them.  However, his best friend's mom, seeing the same toys piling up, picked up the extras and exchanged them for Joe vehicles he didn't get.  But, that original HAL was the only one we ever had.  Despite that, the toy survived much better than any other vehicle that entered our playroom in 1982.  The stabilizer and computer were lost.  But, the toy still functioned without those items.  That original HAL is still around.  My mother's home has a back porch that is filled with toys for her many grandchildren to play with when they come over.  It is a combination of hand me downs from the oldest grandkids, items my mother has purchased on her own through the years and leftover toys from the childhoods of me and my brothers.  There's a few Joe toys in there: a Skystriker shell, a beat up old HQ and this HAL are among them.  They are sturdy and work fine for the kids.  They are all enthralled by some of the toys and incorporate them into play along with stuff you can buy at retail today.

The Laser Exterminator has a few distinct advantages over the HAL.  The most obvious is the color.  But, the stark red color isn't the real draw.  The HAL was all one solid green color.  It's cool.  But, you lose the sense that it's made of multiple parts.  The Laser Exterminator solves this by incorporating black plastic pieces into the mold.  The barrels, base, seat and back are all done up in darker colors: providing a distinct contrast on the toy itself.  It brings the mold to life in a different way from the HAL.  In addition to the coloring, the Action Force rendition also includes a much better array of stickers.  The additional computer display sticker in the gunner's station really adds a lot to the mold and makes the weapon appear more complicated.  It's a subtle detail, but one that shows small things can have a large impact on the overall view of a toy.

The HAL mold was a worldwide staple.  After the U.S. release and Hasbro's repurposing of the mold for Action Force, the HAL traveled to South America where it was released in Brazil and Argentina.  It seems the mold died down there, though, and it never resurfaced again.  In the 2000's, collectors would have welcomed a HAL repaint, regardless of whether it was Joe or Cobra.  Getting any towed vehicle was a treat and seeing a classic mold would have been a great surprise.  Knowing Hasbro of the time, though, any release would have likely been red in a blatant rip off of the Laser Exterminator.  So, we might be better off that they didn't release it.  But, there are lots of HAL's out there for the determined collector to find.  I just think that the Laser Exterminator is the most interesting one.

In the early 2000's, as collectors were just finding their footing, Action Force vehicles and figures were extremely pricey.  At the time, a loose, mint and complete Laser Exterminator might run you $80 to $100.  Red Laser himself was a $100 figure.  But, Action Force exists in large quantities in Europe.  And, the relative lack of language barriers, reliability of postal service and general large size of the European collector base slowly evened out the supply of the Action Force items.  Plus, large quantities of these toys were dumped to European liquidators in the 1980's and huge supplies of MIB Action Force items survived into the collecting world.  Today, complete Laser Exterminators can be purchased for under $20.  You can get them complete with a high quality Red Laser figure for under $60.  It's a far cry from the early days.  But, shows how the demand has been evened out and met.  It's possible that Action Force will one day regain its pricing.  But, that's unlikely.  So, the modern collector has an opportunity to buy up some excellent international pieces at a fraction of their cost from a decade and a half ago.  That alone is reason why the Laser Exterminator should be part of every collection. 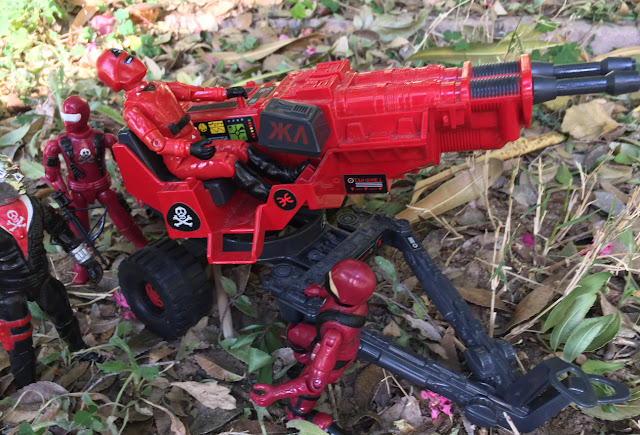 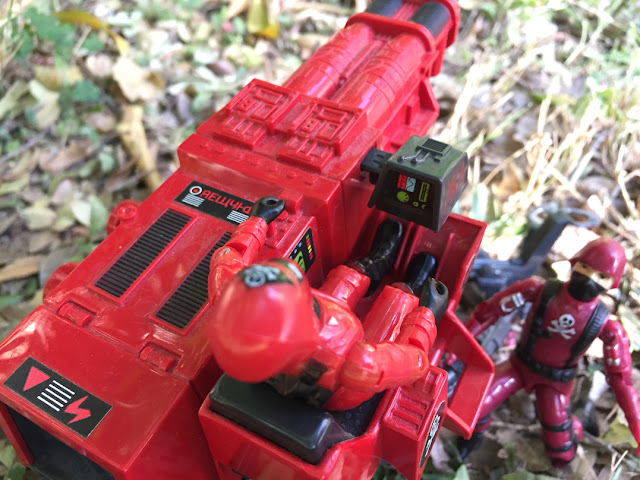 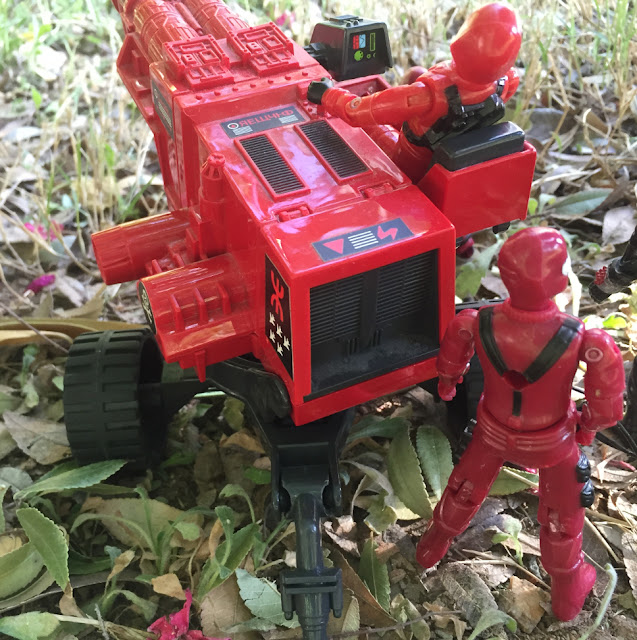 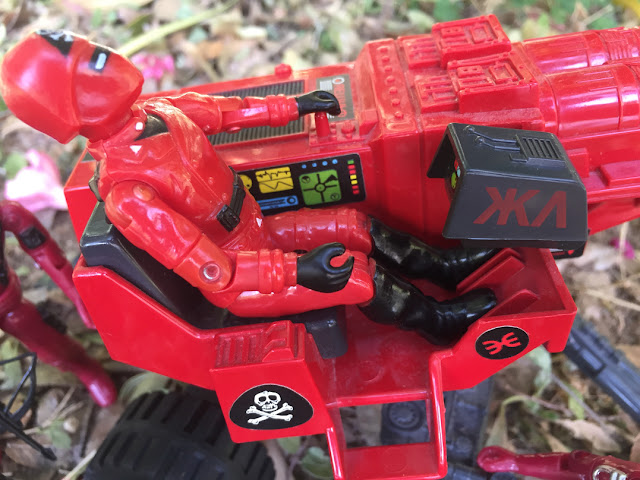