When the factory custom Cobra Troopers first appeared, there were a couple of standard colors for which every collector clamored: crimson, grey and black.  As such, those were the first colors to appear.  These were quickly followed by environmentally themed paint jobs and other subsets.  There was, though, one obvious repaint that I mentioned over and over again on any forum I could: a Cobra Trooper done in the light blue of the Brazilian release Cobra Soldado.  In early 2017, a Soldado inspired Cobra Trooper finally appeared.  It has since become one of my favorite factory custom army builders.

The Cobra Soldado has always been a popular character.  Even in the early 2000's when foreign Joes were mostly ignored, the Soldado rose above the obscurity.  The fan favorite mold coupled with the distinctive aqua blue color lead to a figure that was well known and somewhat popular.  During the army building hey-day of that era, a few collectors went down the road of army building the Soldados.  (There were actually relatively easy to acquire at the time.)  But, the straight arm construction started to limit the value of the character outside of a collectible oddity.  So, you would rarely see any Soldado appear in photos or stories.  Yet, the color scheme was known to the general collecting populace and it would come up from time to time in various discussions about what Hasbro could do for unique coloring back when they were making the Toys R Us army building sets.

There's quite a bit to like about this figure.  First off, this run of Soldados uses a newer Cobra Trooper mold that the figures from the early 2010's.  It is better sized and can use figure pegs on Hasbro molds.  On top of that, the quality issues that plagued some of my earlier acquisitions have been ironed out.  The torsos are well positioned on the waist.  The legs don't flay out.  And, the joints are relatively tight.  The figure is not of Hasbro quality.  But, it's a substantial upgrade over the 2010 era Cobra Troopers.  You can tell this new mold by a stamp on the figure's rear end that reads "Black Major 2017".  The uptick in quality made buying a small army far more palatable for me.  I had been turned off by some of the poorer construction quality figures from the early 2010's that had great color schemes.  So, with this figure, you get a high quality rendition of a that classic color combination.

The paint masks on the figure are very crisp.  At its core there are few paint masks on the figure.  The paint job, in general, matches up with the production Cobra Trooper's paint masks.  You have black highlights with the silver garrote and bullets on the figure's arms.  Inside the garrote, though, is a black fill in.  It's a little detail, but helps the silver around it pop out more.  I'm not sure when this detail was added to the paint masks.  But, it's a subtle difference that gives the mold more depth.  The eyes and skin are well done, too.  This can often be a sore spot on some factory custom figures.  But, all of mine have been fine.

The Soldado includes 4 accessories: a Dragunov sniped, AK-47, backpack and figure stand.  It's nice to get both the classic Cobra Trooper and Cobra Officer weapon.  The backpack is based on the 1986 Viper pack and also fits the Trooper mold.  The stand is a nice throw in.  In all the extra gear adds more value to the figure and gives them more versatility.  It always nice to have some spare AK-47's around to fill out the poorly accessorized Cobra army builders from the 2000's.  I would love for a custom maker to recreate the 1982 Rock and Roll M-60.  The Brazilian Soldado included this as his weapon.  It would be great to get a few cheap M-60 reproductions that could be used to augment the weaponry of my Soldado army.

My uses for the Soldado are many.  For me, the classic Cobra Trooper still forms the backbone of the Cobra army.  They man every installation, operate every turret and remain the cannon fodder that keeps Joe busy while the Commander escapes.  Having this color scheme gives me a nice cadre of enemies that can work well with my Brazilian Joes.  Many of the early Brazilian figures have slight color differences.  So, dropping them in with some Cobra Troopers with color differences works well.  Plus, the classic Steel Brigade figures that were released around the same have a color variance from the production figures that I see as being on par with an Estrela release.  I see them as Brazilian Steel Brigade troopers who make a perfect foil for the Soldado army.

For me, Cobra Troopers are still my preferred enemy figures.  They better match the classic Cobra vehicles.  And, the basic look of the figures more fits with the early '80's view of Cobra before they went super high tech.  I still use the standard Vipers, especially when mixing them with later figures.  But, Hasbro produced so many Viper flavors that I have less interest in them as an army builder than I do the classic Cobra Troopers.  Plus, this was the army builder of the early comic.  So, the appearance of this figure defines Cobra for me in a way that later figures did not.  I find myself more drawn to various Cobra Trooper repaints than I am of other molds for that reason.

In looking at what I have been able to catalog, there are over 45 variants of custom Cobra Troopers that have been released.  And, this doesn't scratch the surface of the many, many logo variants that exist on many of the earliest color variations.  This volume includes a rainbow of colors: some great and some just bizarre.  But, the number of different figures out there is massive.  For me, the Soldado coloring was the last missing piece.  There was a production figure out there in the color and it made perfect sense to visit the Brazilian design in a modern update.  Sure, you could create some color variants for the Plastirama and Auriken Cobra Trooper homages.  But, the Soldado is the boldest and most famous international repaint of the Cobra Trooper.  So, having them alongside Stinger Troopers, Crimson Troopers and some Desert Troopers completes the circle of figures I really want to see made.

In terms of availability, Soldados are still out there.  The initial assortments sold out relatively quickly in early 2017.  But, the figure is now available with either black or red logos.  There is even a small run of the figure using a 1982 "Mickey Mouse" inspired logo, too.  You can get the figures for $8-$10 right now, maybe less if you find a bulk deal.  History has shown that popular colors of factory custom army builders can double or triple in price as the supply is absorbed by the community.  The Soldados appear to be relatively popular as you often see them in photos around the various sites.  And, it's a very rare factory custom army builder that sells for less than its retail price.  So, what I'm saying is that the time to buy an army is now.

I find this figure a perfect example of a foreign repaint.  Black Major took a popular figure that's both rare and expensive and made a cheaper version of it available.  But, instead of just recreating a figure: flaws and all, Black Major improved the character by giving him the swivel arms and a plethora of accessories.  Collectors could now army build a cool variant of the character and have it work with their better articulated armies.  I appreciate that and am grateful to have access to a cool repaint of a Trooper I never thought I'd be able to army build.  In many ways this figure completes my Cobra Trooper want list.  Sure, there might another cool repaint that I will own at some point in the future.  But, for now, there are no other must haves when it comes to this figure mold. 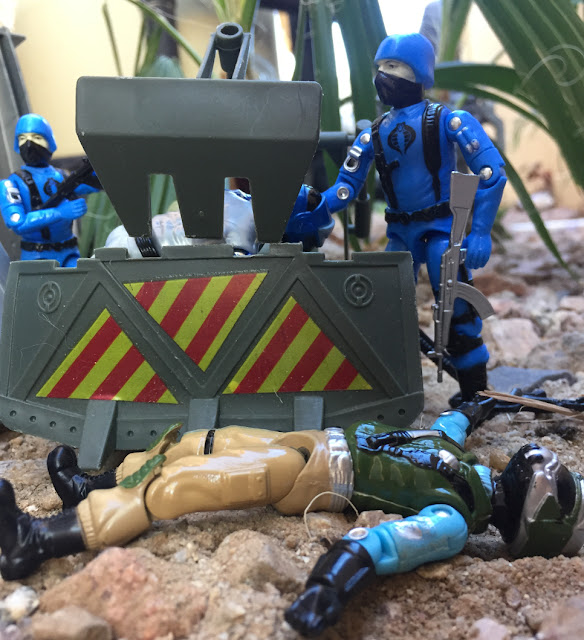 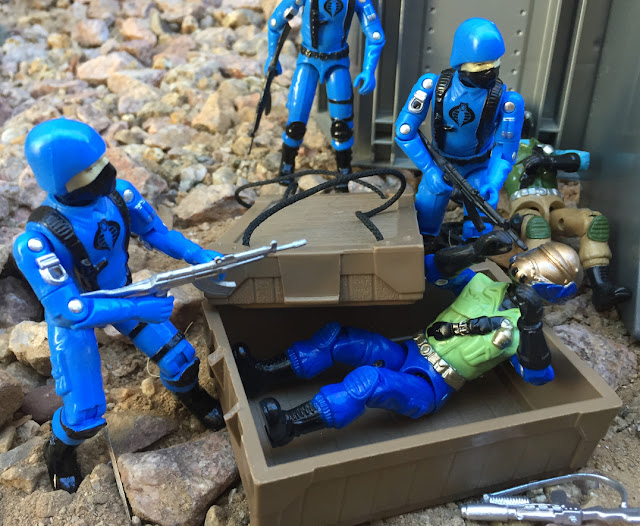 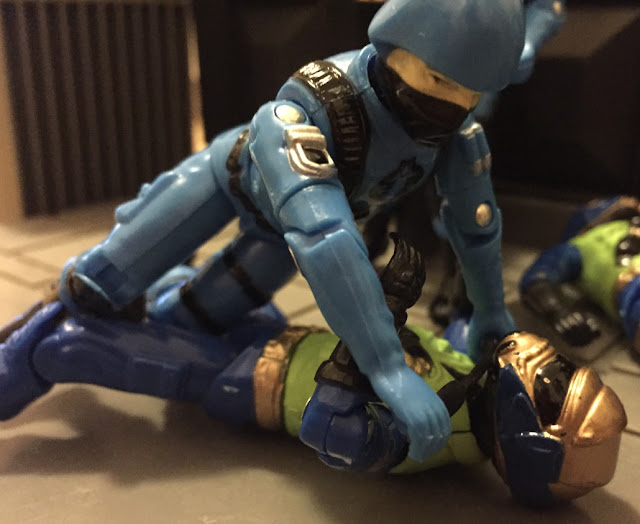 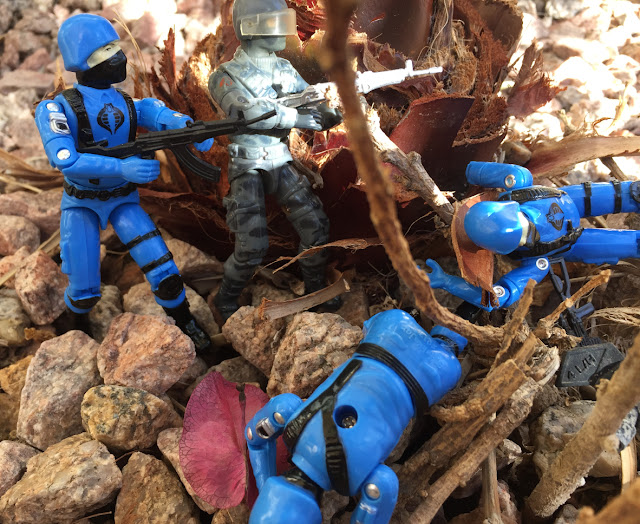 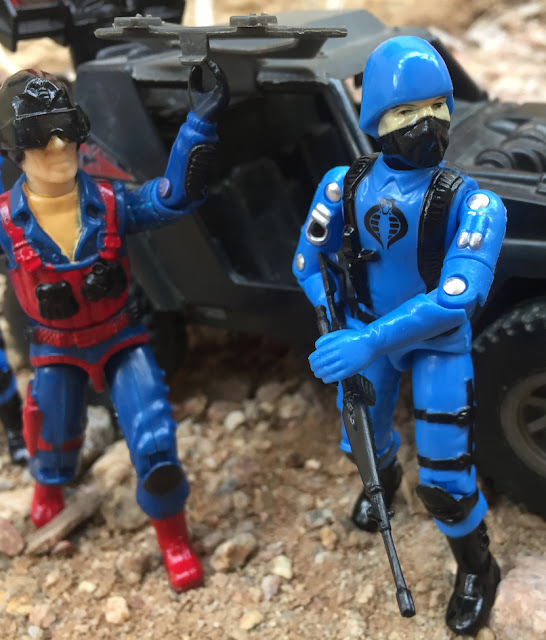 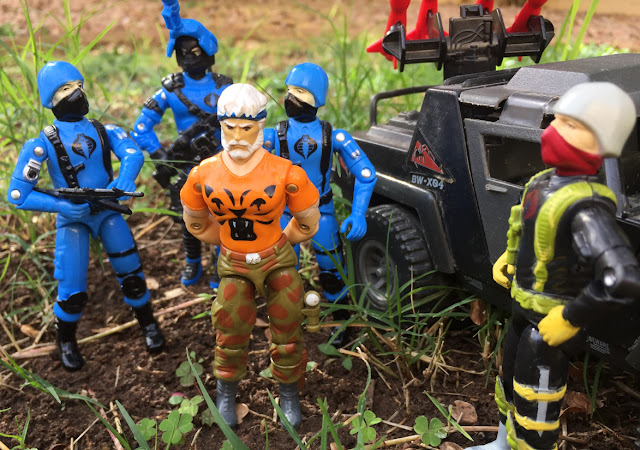