Hasbro had lots of stuff planned for the 1995 line.  Sure, there was an abundance of ninjas and space stuff with an even greater emphasis on aliens.  But, there was also going to be a standard line that was more geared towards the traditional military themes that were so dear to just coming of age collectors in the mid 1990's.  Aside from the return of fan favorite characters in new outfits, Hasbro also looked at bringing back many classic vehicles.  Among them was a proposed repaint of the 1984 Whale Hovercraft called the Sea Wolf.

The Sea Wolf was planned to be an arctic themed release that utilized either a white or grey base for the whale instead of the classic olive green.  It seems Hasbro was big on the arctic theme for 1995 since there exists quite a bit of box art showcasing arctic themed vehicles, figures and gift sets.  It seems odd as the US wasn't really engaged in any arctic combat.  But, it may have just been a phase and a way to release some cool toys in color schemes that were different from the originals, but not neon or oddball colors.

There are 4 characters shown the artwork.  The two in the cockpit are the 1994 Shipwreck figure (a likely choice and a figure that would almost certainly have been re-released in 1995 since he was new in 1994) and the 1993 Duke figure.  Duke, though, is in his desert cammo, 1993 release colors.  It seems unlikely that Duke would have seen a straight re-release in 1995.  It's been long rumored that the 1993 Duke was going to be released in 1995 in green and black cammo.  So, this picture might be a placeholder.  Or, it might not.  We don't really know.  The gunner stations are manned by the planned 1995 Battle Corps Rangers Footloose character.  This mold would have been repainted into Shipwreck, too.  But, the '94 Shipwreck's appearance in the cockpit really cements this gunner as Footloose.

The final figure is unknown to me.  It seems that this arctic figure would have been a single carded release.  Aside from appearing on the Sea Wolf art, he also shows up on the Battle Station artwork.  Anyone appearing on the art for two major releases was surely planned to be a carded figure.  But, who would he have been?  Snow Job is a possibility, though the figure lacks the signature red hair.  Frostbite is an obvious back up.  While he had a 1993 release, Hasbro was starting to reuse characters again and again as the line wound down.  So, it's entirely possible it would have been a new take on him.  Or, it could have been a new character.  Regardless, we can surmise he would have been a single carded release.  Since he appeared on so much vehicle artwork, we can also deduce he would have likely been in the first series of figures released in 1995.  So, his artwork and, possibly, resin prototype figures might still exist somewhere.  I'd love to see this character come to light.

The biggest thing to note about the artwork is that there's nothing really noteworthy about it.  In fact, it appears the Sea Wolf was going to be a straight Whale repaint.  Hasbro wasn't going to create spring loaded weapons to replace the classic missile launchers or cannons.  They weren't going to integrate some sort of action feature to make the toy "exciting" to the kids of the day.  It seems it was going to be the basic toy from 11 years earlier.  And, frankly, had it been released, there's a good chance that mint and complete Sea Wolves would be more expensive and harder to find than Whales today due to lower production numbers.  Being a Whale aficionado, I'm sure I'd have bought this in a second: even if it didn't include any figures.   It would then have quickly joined my childhood Whale and Shark 9000 as the backbone of my Joe navy.

This concept artwork was not really changed for the final box art.  The final product was planned to include a "Special Edition Duke Figure".  It's doubtful the Duke would have been a straight up 1993 repaint as shown on the artwork.  But, it might have used his mold.  The final presentation is a solid combo of the updated style of artwork we started to see in the mid 1990's while hearkening back to the classic vehicle box of the 1980's.  It really cements that the 1995 line would have included some gems.  It's very odd to me that planned items from 1995 never saw the light of day in either the 1997/1998 series or the 2000's era repaints.  If the Sea Wolf mold was ready to go in 1995, how was it not available just 2 years later?  With so many Battle Corps Rangers figures in the full resin prototype stage, why didn't we see at least one included in a Toys R Us ARAH style figure set?  These answers are probably lost to time at this point and would only result in contentious back and forth with a company who has largely left Joe behind at this point.

I often wonder what the Joe world would look like had many of the 1995 items come to fruition.  It's unlikely that they would have saved the line for a 1996 run.  Joe was fatigued.  But, then again, the return of Star Wars to toy shelves in 1995 really jump started the collecting world.  And, coupled with the rise of the cheap and ubiquitous internet, Star Wars invigorated a collecting culture that has survived and thrived since then.  So, it could be that had 1995 occurred, Joe would have hung around long enough to catch the collector wave of late 1997 and we might have never seen a true hiatus of vintage Joes.  But, that didn't happen.  And, we are left to salivate over items like this that never came to be. 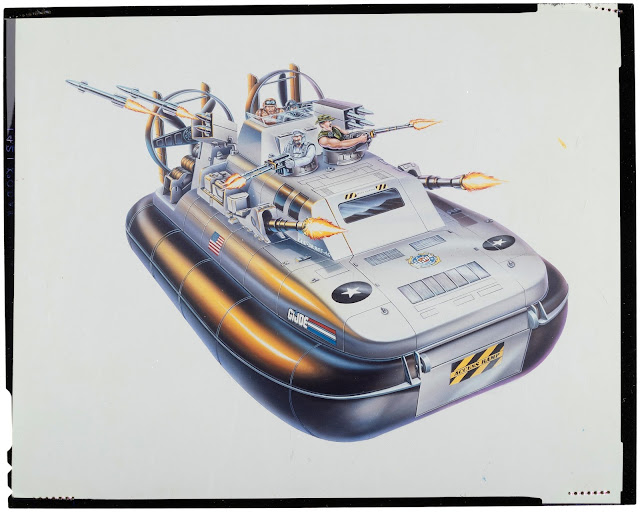