Funskool is notorious for producing their figures for a variety of corporate tie ins.  As they are owned by a rubber company who makes its fortune in tires, they have a bit different approach to product tie ins that a major American toy company may have.  In many ways, Funskool's corporate partnerships in the 1990's and early 2000's were reminiscent of Hasbro's and Kenner's from the 1970's and 1980's.  Along with Pepsodent, Complan and TV marketing deals, Funskool also worked with Calcium Valdoz for a series of figures based on G.I. Joe molds.

I'm not sure what Calcium Sandoz is.  It's a supplement of some sort that was discontinued in the UK in 2015.  But, in an effort to get children in India to take it, the company that produced the product worked with Funskool to offer some G.I. Joe figures as a promotional opportunity.  The figures were different from classic Funskool releases in two ways.  First, most of the figures are unique color schemes to the Calcium Sandoz premium.  But, more interestingly, all of the figures have a new pair of straight arms on them.  Below you can see some samples of the figures and the exclusive color schemes that go with them.

The Hydro Viper is one of the best recolors of the line.  This blue version would be a great crew-member on a Moray.  The terrible arms, though, mostly ruin what should be a classic repaint.  It's too bad that this color scheme was never offered with the swivel arms on the standard cardback. 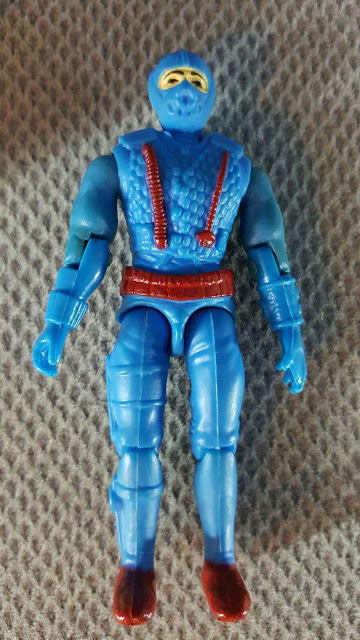 You can see a sample of Stormshadow in the photo below.  He is missing the classic cammo pattern from the 1988 mold.

You see that the arms are not the original Hasbro molds for straight arms.  For some reason, these figures were all given these new arms.  This is odd as the copyright for these figures is from 2003: a timeframe when we know that Funskool was still producing carded G.I. Joe figures and had full access to the original molds.  Below you can see a Captain Grid Iron figure with the exclusive coloring as well as the back of the insert card showing not only Grid Iron's bio, but the copyright date, too.  Also note that his colors are drastically different than the carded figure variants.

There are a lot of different figures in the set.  I'm not sure of the entire roster.  I have included the figures of whom I am aware in this post.  But, please let me know of additional figures in the comments below.

Here you will see Blaster with a body colored like the "Vehicle Driver" Blaster that was found bagged inside of specific vehicles in the early 2000's.  It's appearance here actually helps us understand how such a variant came to appear in vehicles.  But, this figure also uses the color scheme from the 2001 Funskool General Hawk. 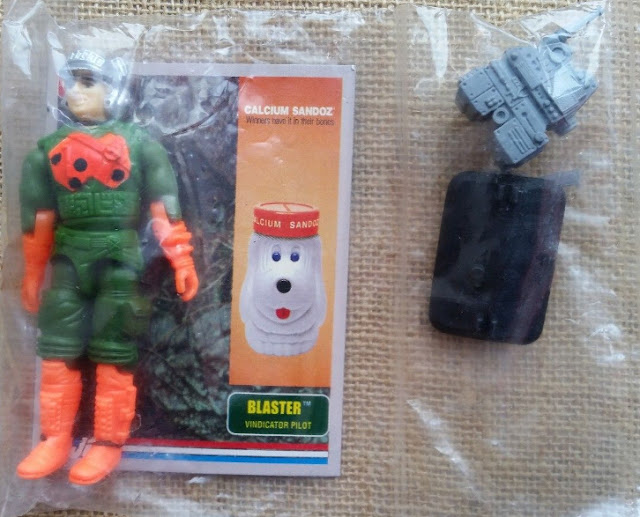 Deep Six is colored very similarly to the single carded figure.  There are some variants on this figure with plastic that's more translucent or opaque. 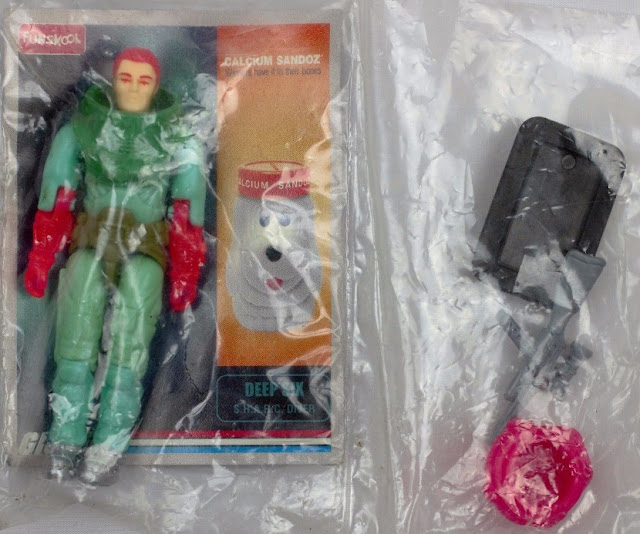 This Desert Scorpion is an interesting combo.  He has unique lower arms that are still the straight arms.  The figure's general base colors are similar to the single carded figure.  But, the figure lacks highlights and has some color differences such as the color of the figure's head/antenna. 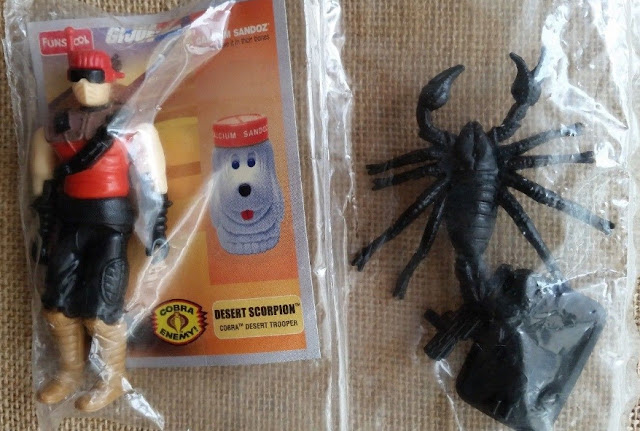 Again, Sci Fi has unique lower arms.  But, the figure is colored almost identically to the single carded version of the figure. 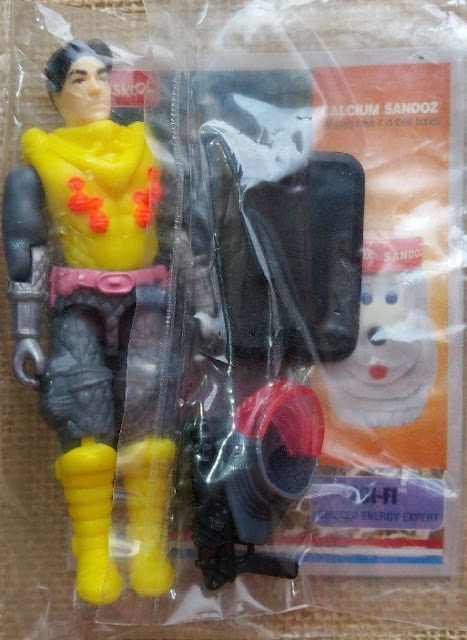 Lifeline uses base colors similar to the carded figure.  But, this version is missing all the paint applications.  The Funskool Lifeline has very intricate paint masks an their absence here makes the figure look unfinished. 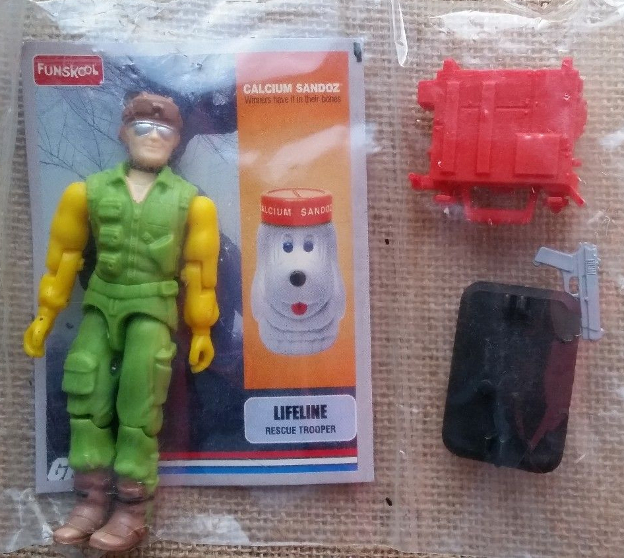 Like Blaster, this Psyche Out is in the colors of the mysterious "Vehicle Drivers" set.  But, this version has the terrible straight arms.  This color scheme for Psyche Out, but with the swivel arms, has been found in Funskool Halibna and Maldova promotional figures, too. 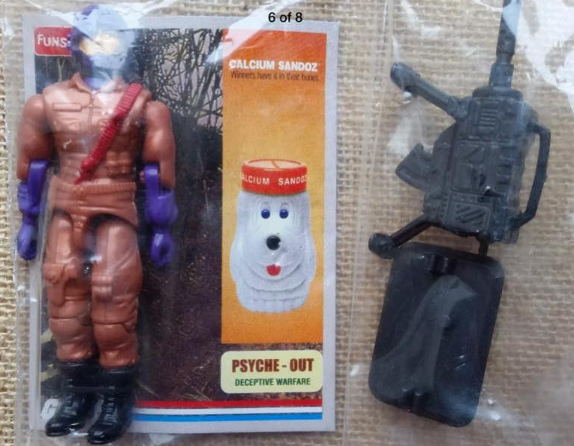 Big Boa is blue.  As a figure, this is probably his best base coloring.  The head is also more silver than the grey version from the single carded figure.

The Calcium Sandoz figures have gotten to be stupidly expensive.  Bagged versions can run upwards of $500.  But, like most foreign Joes, these guys were easier to find just a couple of years ago.  And, now, many characters have all but disappeared.  However, as these were 2000's era releases, it's likely that there are more of them out there that will show up as kids from that time start looking to liquidate some toys. Until then, though, these guys are hard to find and expensive.
Posted by Robot_Sonic at 2:00 AM
Email ThisBlogThis!Share to TwitterShare to FacebookShare to Pinterest
Labels: Big Boa, Blaster, Captain Grid Iron, Deep Six, Desert Scorpion, Foreign Figures, Funskool, Funskool Promo, Hydro Viper, Lifeline, Psyche Out, Rarities, Sci Fi, Stormshadow