As one of my Halloween profiles, I dug out the Manimal Slythor.  My sample was the KB Toys exclusive release from 2001.  Below, though, you will the Slythor figure as he was originally designed.  In 2001, Hasbro and KB were concerned about creating a figure that could be confused with an original Manimal and deliberately produced them with different colors.  While the KB version was green, the original intent was for Slythor to be red. 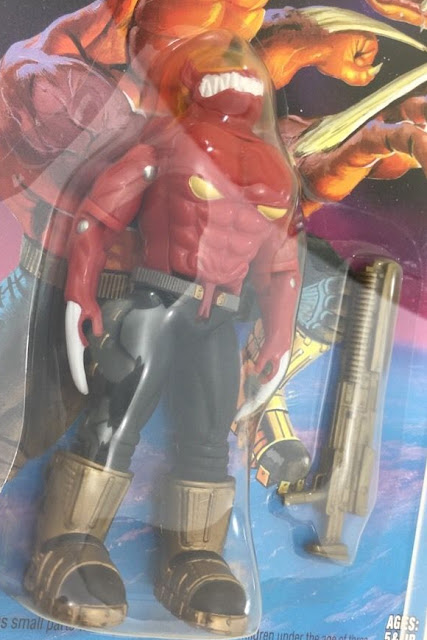 You will note that the figure still has his inappropriately placed tongue.  But, the yellow eyes are far more pronounced on this version than on the later paint job.  The weapon is also cast in gold plastic rather than the black from 2001.  In general, this figure appears angrier than the 2001 release.  But, I think the 2001 paint job is actually better.  It looks more like a snake and the darker eyes give the beast a more plausible appearance in his non-transformed state.  If you're going to repaint something, I'd always prefer the repaint be an upgrade over the original.  And, in this case, I think it is.

Here you can see the Manimal cards. 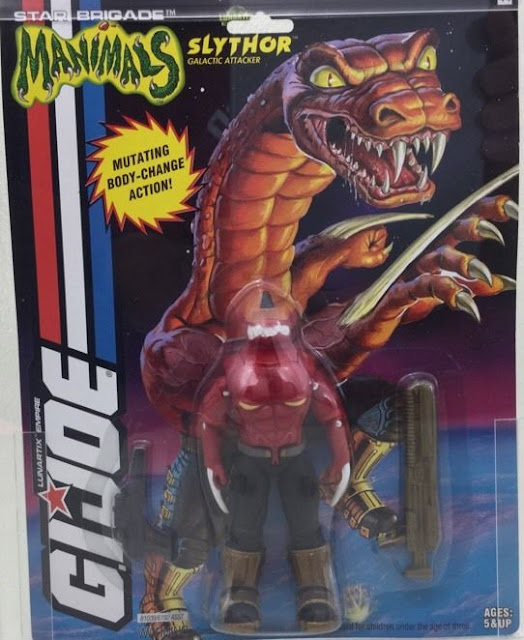 You'll note that Manimals are not only part of Star Brigade, but also part of the Lunaritx Empire.  This ties them more closely with Carcass, Lobotomaxx and Predacon.  (You'll note that this figure's color scheme is also very similar to the Mexican Predacon's.) 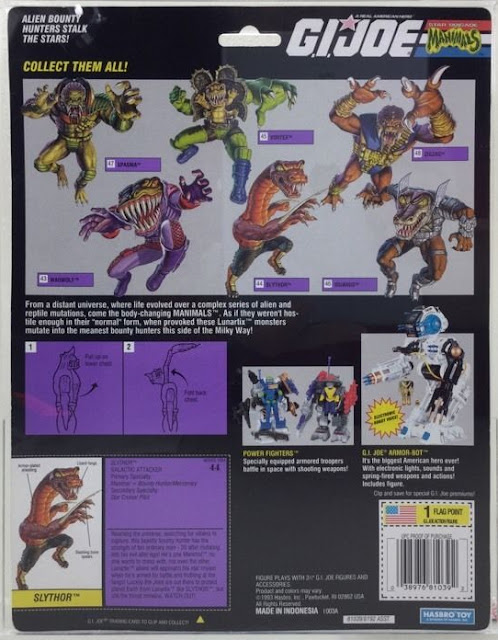 The cardback shows off just the Manimals with cross sells of the new Power Fighters and the then pegwarming Armor Bot from 1993.  Another noteworthy item is that Slythor is number 44 in the planned releases of 1994 Joes.  However, the second wave of Star Brigade figures that were released in 1994 begin their numbering at 49: after the Manimals.  So, the Manimals were planned for release within the Star Brigade window.  Why they were cancelled when the wave of Lunartix aliens who were planned after them made it out is anybody's guess.  You will also note that the Manimals were made in Indonesia as Hasbro sought ways to further cut costs on a dying line.

In looking back, there probably wasn't anything that was going to change Joe's fate in 1994.  Had the Manimals been released, they couldn't have hastened the demise of a franchise that was already deceased.  In that respect, it's unfortunate we didn't get them.  But, at the same time, were these actually released figures, no one would care about them at all.  I'm about as big a Star Brigade fan as there is.  Yet, I don't really consider the 2001 Manimals part of that line.  I don't display with the other astronauts and I can't find a way to integrate them: even though I've found Predacon, Lobotomaxx and Carcass relatively simple to do so.

For me, the Manimals remain an interesting part of Joe lore.  Lots of casual toy collectors in the mid to late 1990's were aware of the brand only because of the Manimals and the few specimens that seeped into the collecting world.  There are more carded Manimals than many would like to believe.  In the late 1990's and early 2000's, Manimals were a staple on Ebay.  Usually, you could get a few each year.  Carded versions would sell for a couple of hundred dollars at the most since collectors didn't care.  That's not the case now as real rarities and unproduced Joe items have exploded in price and popularity.  Now, this figure is easily over $1,000 for a carded sample, maybe even a few times that.  It's not a price I'd pay as I don't find the figures all that interesting as far an unproduced Joe items go.  But, your mileage may vary.
Posted by Robot_Sonic at 1:25 AM
Email ThisBlogThis!Share to TwitterShare to FacebookShare to Pinterest
Labels: 1994, Manimal, Rarities, Slythor, Star Brigade, Unproduced