From the beginning, Hasbro had a good relationship with Sears.  And, why not?  In the early 1980's, Sears was America's largest retailer.  No company who made retail products could get large without selling their wares through Sears.  And, the backbone of Sears's retail might was it's catalog business.

Long before the internet, if you didn't live in a place with retail stores, you had to resort to shopping and ordering goods from catalogs.  This wasn't just for hermits and those who were heavily isolated.  Even into the early 1980's, towns of 20,000 to 50,000 people would have limited retail options.  So, stores like Sears had huge swaths of the American population who were dependent upon them for ordering many items.

So, Hasbro got into bed with Sears rather quickly.  The downside to the catalog business, though, was shipping and handling.  The extra space for full figure cardbacks were a detriment for the shipping costs.  So, Hasbro and Sears came up with a solution.  Instead of putting the figures on full cardbacks, they packaged them into bubbles that were affixed to a reproduction of the figure's filecard.  This smaller size lent itself to mailing.  It also created a subset of collecting that contains some of the hardest to find items in the entire Joe line.

Below you will Sears catalog figures for the 1982 Snake Eyes and 1982 Cobra Commander.  The Commander is noteworthy because he is not the Mickey Mouse version.  But, he is the straight arm version.  This configuration of figure was available from Sears in the Missile Command set and this mail away.  I got two of them from the mail away offer in early 1983, as well. 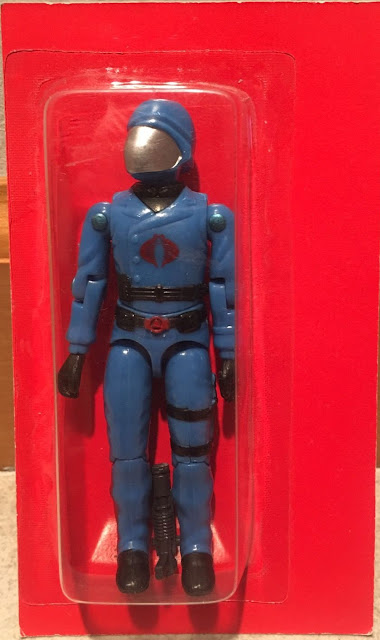 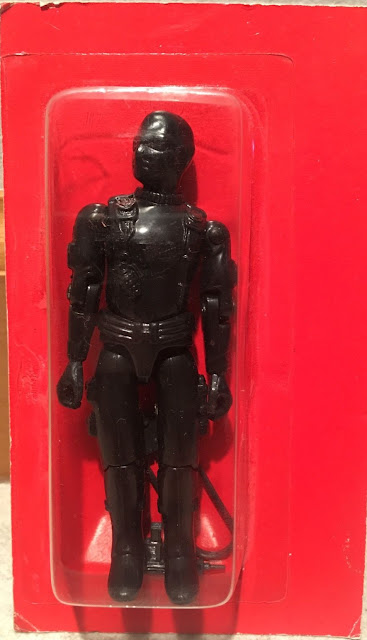 You'll also note that the accessories are package right with the figure.  This was the standard for vehicle drivers and would appear again with JC Penny's catalog figures as well as bubbled overstock vehicle drivers from the Action Force line in Europe.

The figures were attached to a filecard that included a flagpoint.  It was a way to keep the characterization with the figure and still give the recipient of the toy an idea of the card art without incurring the additional hassle of superfluous packaging. 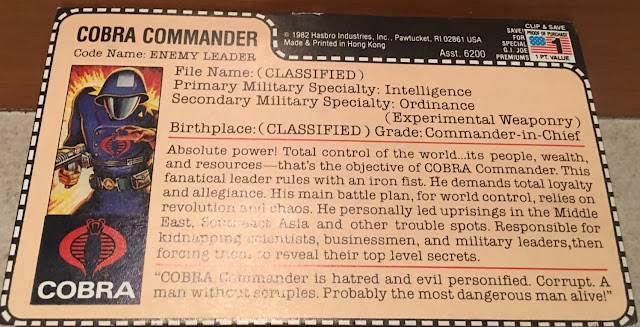 Figures still attached to their bubbles on these filecards are extremely rare and expensive.  Even the filecards alone (with the bubble marks on the red side) can command hundreds of dollars.  While Sears ordered enough product to make it worth Hasbro's while to create alternate packaging, the production numbers would have been substantially smaller than the standard carded figures.  Loose, the figures are indistinguishable from their retail counterparts.  But, the cards and evidence of the catalog origins remain grail type items for many collectors.