We all know about the second series of Plastirama figures released in Argentina.  The six figures are stuff of legend and remain among the rarest and most expensive figures released anywhere in the world.  But, there are even rarer versions.  The Rubiplas toy company in Venezuela also produced the figures from this series.  Most of the figures have slight differences.  They are even rarer than the Argentine versions of the characters.  Below, though, is a carded sample of a Rubliplas Topson figure.

There is an obvious difference with this figure: the Recondo rifle.  This is interesting for a couple of reasons.  The Plastirama Topson (as far as we know) came with a version of Grunt's M-16.  We know that Recondo was sent to Brazil for release there around 1987 or 1988.  Recondo appeared on the cardbacks of Plastirama figures: but was never released in Argentina.  So, it's possible that Plastirama had the mold and Rubiplas got ahold of it.  But, why use the gun for this Topson?  Was the Grunt M-16 separated from theses figures and not available?  You'll also note he has a helmet mold originally from Blowtorch.  The Plastirama version has been found with the classic 1982 helmet, molded in grey instead of this Blowtorch version.  But, it's possible that both helmet combos were released in Argentina, too.

The card artwork for this figure is a combination of classic Joe excellence with a bit of foreign silliness.  We see Topson clearly holding the ammo pack originally included with Snake Eyes.  But, it has an added antenna to it to make it appear as a radio.  This Topson figure includes an unaltered ammo pack.  There is some disagreement as to what the Plastirama version of Topson includes in regards to the radio.  We'll have to find a carded version from Argentina to be sure.  But, the different Recondo rifle opens up the door that other accessories were changed between the countries, too. 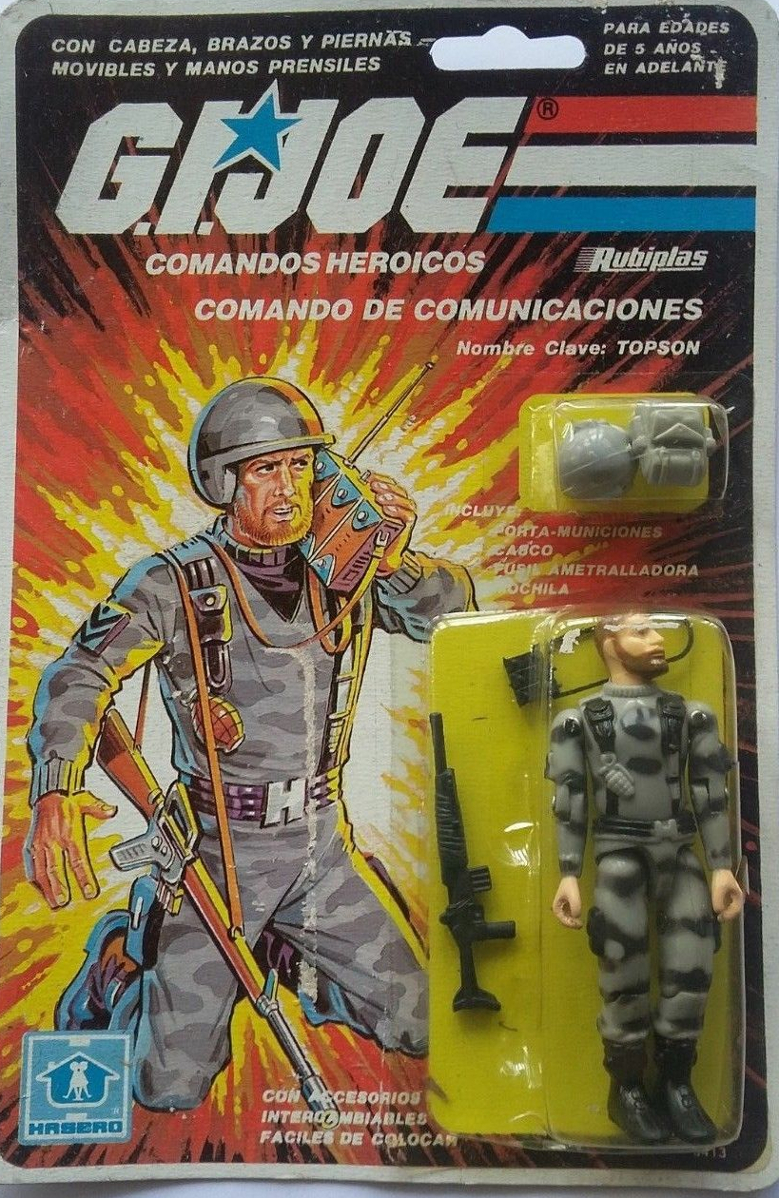 Posted by Robot_Sonic at 1:28 AM
Email ThisBlogThis!Share to TwitterShare to FacebookShare to Pinterest
Labels: Cardbacks, Rarities, Rubiplas, Topson, Venezuela