I don't own a Cobra De Aco figure.  I've never owned one and I likely never will own one.  It's not because the figure is rare.  (He's really not.)  It's because he's straight arm.  And, I really don't have the inclination to seek out and spend decent money on a straight arm figure.  The sad part is, the Cobra De Aco pretty much personifies why I like foreign figures.  He's a new character, a drastic repaint and an amalgamation of multiple figures' parts.  All that adds up to a winner.  But, straight arms kill him.

In 1994, the 30th Anniversary trading card set was released.  It showcased a lot of rare G.I. Joe items that, at the time, collectors had few avenues to ever see.  Among them was the Cobra De Aco figure.  It was listed as the rarest G.I. Joe figure in the world and that there were only a few of them in the whole world.  This might have been true at one time.  But, the cards didn't really foresee the impact of the Internet and how it made the world smaller.  As late as 2002, there were still dealers who felt there were only a handful of Cobra De Aco figures out there and would try to sell the figures for massive amounts.  But, Brazilian collectors had found hundreds, if not thousands, of De Aco figures and have shipped them to collectors in the U.S.

Today, the figure is fairly common, even complete.  Most do have some paint wear as the yellow pads, Cobra logo and chrome head are all susceptible to wear.  But, even high quality figures aren't all that much different in price than they were 15 or so years ago.  In the early 2010's, the Black Major produced bootleg De Aco figures.  Depending upon how you feel about straight arms versus swivel arms, the figs were awesome or terrible since he kept the straight arms from the original design.  Along with homages to the Brazilian release, he also repainted the mold several times.  So, there are more affordable ways for collectors to get a version of the figure should they want it. 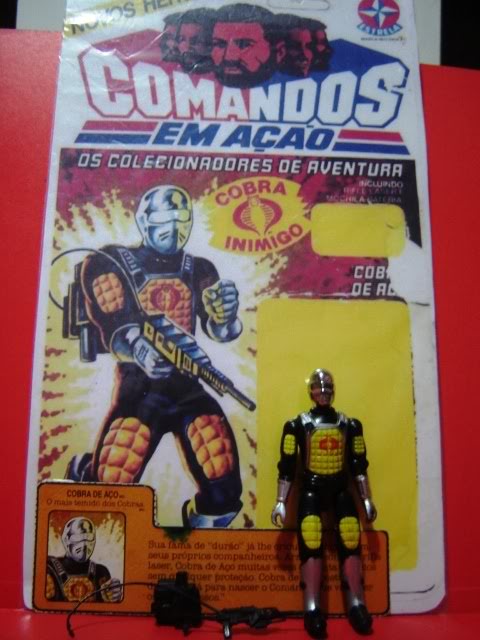 Posted by Robot_Sonic at 1:01 AM
Email ThisBlogThis!Share to TwitterShare to FacebookShare to Pinterest
Labels: Brazil, Cobra De Aco, Foreign Figures