In late 1997, I found the Toys R Us exclusive Stars and Stripes figure set.  I quickly bought it: excited to see new Joes at retail.  As 1998 dawned, though, Hasbro started releasing wave after wave of excellent new Star Wars figures.  Simultaneously, they were pumping out army builders galore.  In short, Star Wars consumed most of my collecting time and money.  On top of that, I had been disappointed in the Stars and Stripes set.  It hadn't captured my attention enough to really sell me on Joes.  So, trip after trip to Toys R Us, I'd pick up a G.I. Joe pack and each time, put it down, leaving it behind.  When Hasbro finally bungled some Star Wars case assortments in the summer of '98 and basically killed the line, I turned back to Joe.  Now, though, I was buying vintage Joes online.  I simply didn't see the need to buy the Toys R Us figures when I could get more vintage figures for the same price.  Again, the '97 Joes were left behind.

When the 1998 Joes shipped, though, everything changed.  Star Wars became an afterthought and G.I. Joe became my number one collecting priority.  Still, though, I never went back and bought the 1997 Joe packs.  I don't really know why.  But, I think my looking at them for a year had left them as old news, even if I didn't actually own them.  Plus, I found it more satisfying to buy additional Cobra Infantry or Polar Assault packs than I did to get repaints of characters I wasn't overly interested in at the time.  In 2000, the 1997 Joes dried up from retail.  They even got hard to find online.  As 2001 began, 1997 Joes were starting to get expensive and were kind of hard to find.  I snapped up a poorly labeled lot of figures that included all of the 1997 figures I had left on the shelves.  At first, I didn't pay them much heed.  In time, though, I found the gems in the release year.  Now, 20 years later, I find many of the '97's to be among Hasbro's best post-vintage work.  Yes, Hasbro was hamstrung by missing molds and a tight design window.  But, the sets feature a lot of fun and interesting figures that were never replicated.  The 1997 Cobra Commander fits that mold.

Originally, the 1997 Cobra Commander was to be a repaint of the 1983 battle helmet Cobra Commander mold.  It would have been in dark blue with gold highlights.  (There are photos of handpainted samples out there that showcase the idea.)  However, Hasbro could not find the Cobra Commander mold.  This was somewhat odd since Hasbro had used it in 1994 for the Chinese exclusive run of Cobra Commander figures.  But, with no mold, Hasbro had to find another idea.  They settled on the 1987 version whose mold had just been returned from Funskool.  They gave this mold the same dark blue and gold theme and released him in a three figure back with Destro and the Baroness.  This three pack featured artwork from the 1983 versions of both Cobra Commander and Destro, even though neither original mold was present.

The effect of the dark blue plastic, though, was actually quite striking.  Visually, this version of Cobra Commander is substantially different from the original release of the mold.  It gave collectors a version of the Commander who could wear his late '80's iconic outfit and yet still blend in with Vipers and other figures utilizing the classic Cobra blue.  The gold and red highlights give the figure and regality.  This figure looks like something that Cobra Commander would have worn and is an excellent alternative for the silver and light blue of the original mold colors.  I rank this version as the 5th best release of the character, behind the original, the Hooded mail away, the 1993 and the Star Brigade figure.  Your mileage will vary.  But, this is a figure I can appreciate.

Gear wise, this figure is pretty sparse.  He includes the requisite figure stand (which was a great inclusion in 1997) as well as a version of the classic Cobra Commander pistol.  Sadly, the pistol looks out of the place with this mold.  The greater detailing and bulkier sculpt makes the weapon look puny.  An original 1987 pistol is a much better fit.  Oddly, Hasbro never released the 1987 pistol with any subsequent versions of the mold from the same year.  Yet, they did release the weapon in silver in 2002.  So, you can track down a cheap 2002 Snow Serpent and steal the silver version of his weapon and give it to this figure or one of the later 1987 Cobra Commander repaints as a way to reunite the figure with his intended weapon.  For me, classic figures look out of place without their appropriate guns.  Likewise, later figures look out of place with reissued early weapons.  So, I prefer an alternative weapon for the figure and save the classic 1983 pistol for other uses.

This figure's biggest flaw (other than not being the V1 mold....) is the lack of the helmet hose.  For some reason, Hasbro did not include the hose from the 1987 figure on this 1997 version.  Those hose had appeared on the international versions.  But, not here.  Hasbro modded the head to not have the page on the helmets left side to which the hose affixed.  They also made the mouth hole shallower.  As such, if you have a spare 1987 hose lying around, it barely fits onto this figure and easily falls off.  In the photos below, my Cobra Commander has a spare hose.  But, you can see the how ill fitting it is.  In 2001, the hose returned with this mold.  So, it wasn't a missing piece.  Hasbro just didn't feel they needed to include with the 1997 figure.  To me, the head looks incomplete without the hose.  So, I have to have one.  I have not tried a 2001 hose to see if it fits better.  But, the 1987 version is not a great match.

Personally, I'm not a huge fan of the 1987 Cobra Commander mold.  It's a cool enough figure and was a valuable addition to my collection in 1987 since my original Cobra Commanders were all worn out and broken.  But, the figure quickly fell into disfavor.  I didn't like any character wrapped in invincible armor.  Nor did I like the direction that the comic took with the Cobra Commander replacement.  So, to me, Cobra Commander wearing this suit never approached an iconic visage for the character.  That lead to this 1997 figure getting lost in the sea of acquisitions that comprised my collecting in the early 2000's.  It has only been recently that I've really grown to appreciate this release.  The rich colors, excellent paint details and general diversity from other uses of the parts has created a figure in whom I find great value.  This dark blue version of the battle armor is my favorite appearance of the Commander in this get-up.  While I overlooked him for years, it's nice to find him now.  It's proof that the vastness of the Joe line can obfuscate solid figures right before your eyes.

This Cobra Commander mold was used rather extensively.  Hasbro released the figure in the U.S. and Europe starting in 1987.  From there, they mold was sent to Brazil.  Estrela released the figure in colors nearly identical to the American release.  When Estrela was done with it, the mold went to India.  Funskool then also released this Cobra Commander in colors nearly identical to the American release.  The main difference in India was Cobra Commander's weapon.  Instead of the unique pistol from his earlier releases, he was given a stock-less Crazylegs rifle in India.  Hasbro got the mold back in 1996/1997 where it was used for this figure.  Hasbro released it again in 2001, again colored similarly to the 1987 release.  In 2005, the mold appeared twice.  First, it was used for the Comic Pack "Fred" Cobra Commander.  This release featured a new head and helmet, but was also colored similarly to the 1987 figure.  The body was also used on the Imperial Processional Guard figure.  At least this body was colored differently. For Cobra Commander releases, this 1997 figure remains the only significant repaint of the mold.

Time was, 1997 Joes were expensive.  This Cobra Commander was a $15 figure, 15 years ago.  Now, though, pricing has softened.  While there aren't any real alternatives to this mold in this color scheme, this version of Cobra Commander has been generally forgotten by the collecting world.  You see lots of dealers who will get $10 for this figure just because you don't see many offered for general sale.  However, you can get a carded set with the Baroness and Destro for $20 these days.  So, before you pay half that for just this Commander, I'd buy the full three pack and get all three figures.  They all have their charms and are well worth the $20.  This Commander is worth even the $10 just because he's the only way to get the updated take on the character in classic Cobra colors.  It just seems so odd that among so many releases of the mold, this one would stand apart as the singularly different release that was true to the Commander's roots.  But, that's the main reason I've grown more fond of the 1997 releases in the decades since their release.  They tried to be vintage.  While that's not always a perfect strategy, it was far better executed than the neither vintage nor interesting figures that tended to follow in the 2000's. 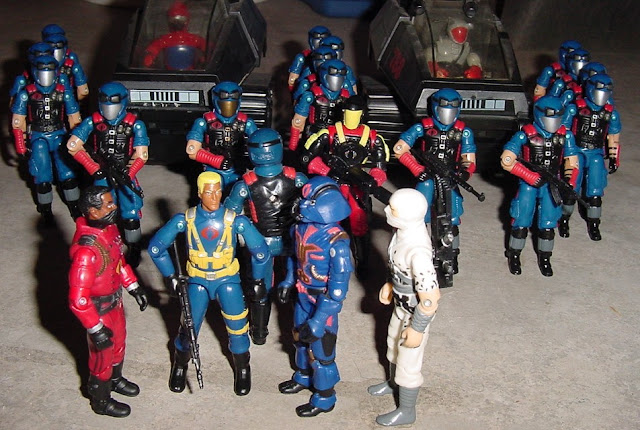 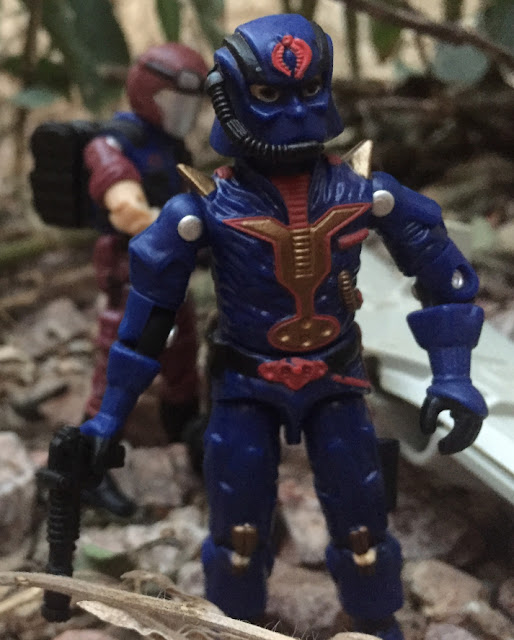 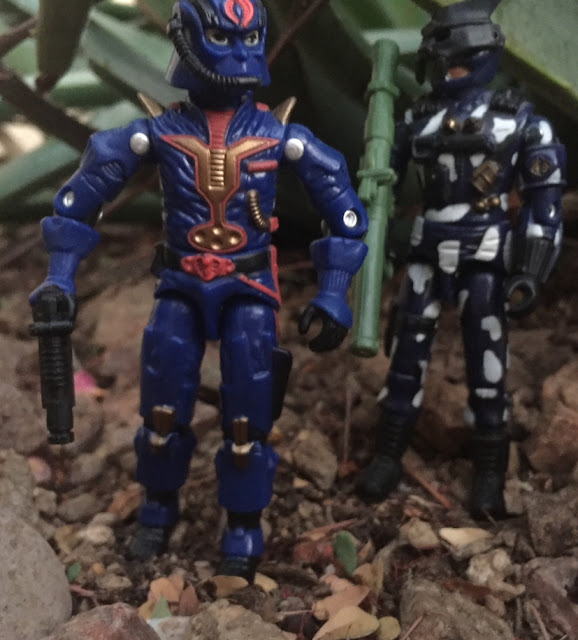 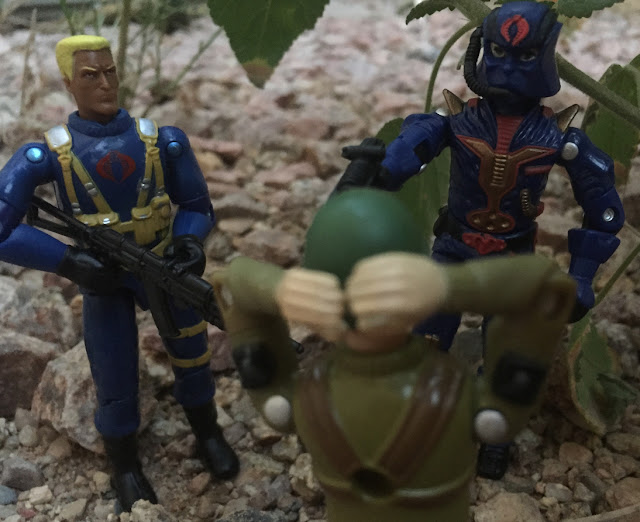 Posted by Robot_Sonic at 1:23 AM
Email ThisBlogThis!Share to TwitterShare to FacebookShare to Pinterest
Labels: 1997, Cobra Commander, Retailer Exclusive