In the late 1990's, foreign Joes that weren't the Chinese exclusives, later run Estrela figures or a few, select Funskool releases were rather scarce to come by.  You would see some displayed at conventions and there were a few pictures online.  But, information was incomplete.  One day, though, a bunch of Korean carded Joes showed up on online auction sites.  The figures themselves were Hasbro produced items from the early 1990's.  These generated quite a bit of discussion as collectors argued over whether to bid them up because they were Korean or to ignore them since the figures weren't exclusive: just the packaging.

The end result is that the figures didn't sell for much.  I think I paid $15 for the figure below and sold it for about the same a couple of years later.  But, I liked this Gung Ho.  I was drawn to him because I had bought a 1992 Gung Ho figure at retail and considered him one of my "return to collecting" figures.  But, I also liked the juxtaposition of the American flag on the packaging and with the figure, yet with Korean writing.

There were quite a few figures in this series.  But, the images I saved are long gone and I didn't save a scan of the cardback.  This Gung Ho is another one of those little oddities that I've owned over the years that I wish I had hung onto.  Not that it's overly valuable or rare.  But, the figure is interesting and is a fun way to show off just how influential the Joe line was around the world. 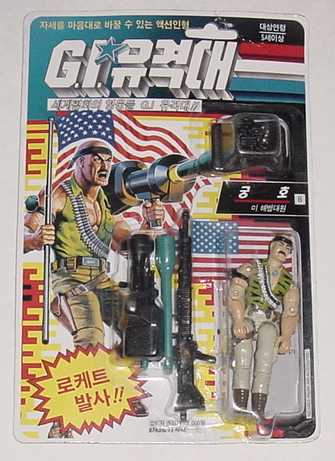 Posted by Robot_Sonic at 2:46 AM
Email ThisBlogThis!Share to TwitterShare to FacebookShare to Pinterest
Labels: 1992, Foreign Figures, Gung Ho