Starting in the 1990's, Funskool occasionally made something odd out of the G.I. Joe molds they had available.  For many years, the "Super Hero" figure was the most famous.  But, as Funskool invaded American shores in the early 2000's, he was supplanted by the high quality Street Hawk figure.

Street Hawk was based on a forgettable TV show that was airing in India.  The figure was a multiple marketing opportunity as they used the show to cross sell and introduce G.I. Joe.  You will also notice the highly prominent MRF brand on the tires, MRF being one of the owners of the Funskool toy company.

The card art itself is bigger than normal.  But, that's to accommodate both the figure and the repainted RAM that makes up the duo.  You'll note the rider looks a lot like Snake Eyes.  This is because the first Street Hawk figure released was actually a Snake Eyes repaint with a black helmet.  It's a highly desirable variant and a very nice Snake Eyes version.  By 2001, Funskool was on at least the third version of the figure, this one mostly using parts from TARGAT.  There are a few waist variants among these figures, adding more complexity for Funskool collectors to hunt down. 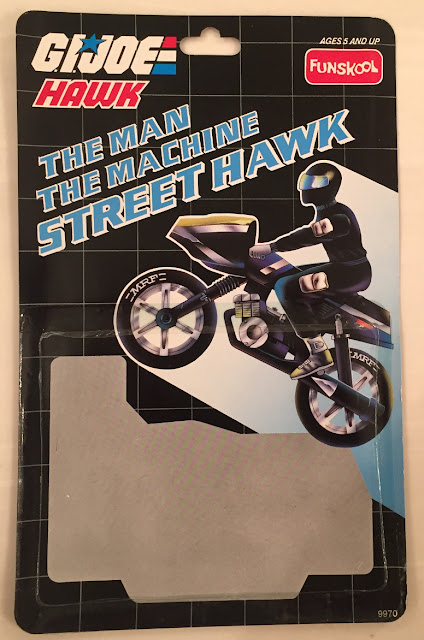 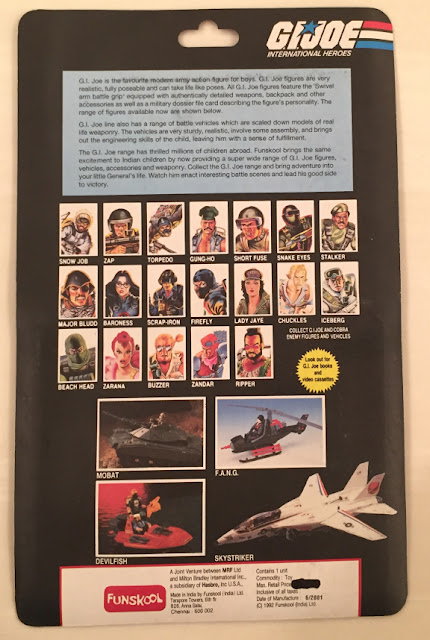 For the vehicles, you will notice the MOBAT.  Funskool MOBATs are notoriously hard to find and can be pricey.  While the stock photography you see showcased on the cardback is from vintage Hasbro days, Funskool did release all of the vehicles shown.  All save the MOBAT were available well into the 2000's, too.

Posted by Robot_Sonic at 6:55 AM
Email ThisBlogThis!Share to TwitterShare to FacebookShare to Pinterest
Labels: Cardbacks, Foreign Figures, Funskool, Streethawk