In Japan, a small series of G.I. Joe figures were released by the Takara toy company in the 1980's.  These figures were made by Hasbro and are, for all intents and purposes, exact mimics of the American and European release of the same characters.  The notable thing about Takara figures, though, is the packaging.  The Joes are carded on a striking blue background while the Cobras explode off a red cardback.

In the late 1990's and early 2000's, collectors made the Japanese figures very popular.  This was a combination of the fact that they were plentiful, featured collector favorite characters, were visually interesting and were pretty cheap.  In fact, for a while in the early 2000's, there were several characters who were cheaper to buy carded on Takara cards than they were to buy mint, loose and complete American versions.  Those inequities ironed themselves out in time.  But, Japanese Joes are still rather cheap in comparison to the same characters on American or European cards.  It seems that Joes were either very unpopular in Japan, or they overproduced them by huge amounts.

Below is Flint as a representative of the Joes.  You see the eye pleasing blue card along with the classic character artwork.  There the oddball eagle logo, too.  Personally, I really enjoy the Takara figures due to these nuances.  They look like Joes, but are different enough to draw attention to themselves.  The supply of these figures are kind of drying up and it's getting harder to find many of the more popular characters in good condition.  In turn, prices are rising.  But, they are still cheaper than many of the alternatives for classic '83 - '85 figures. 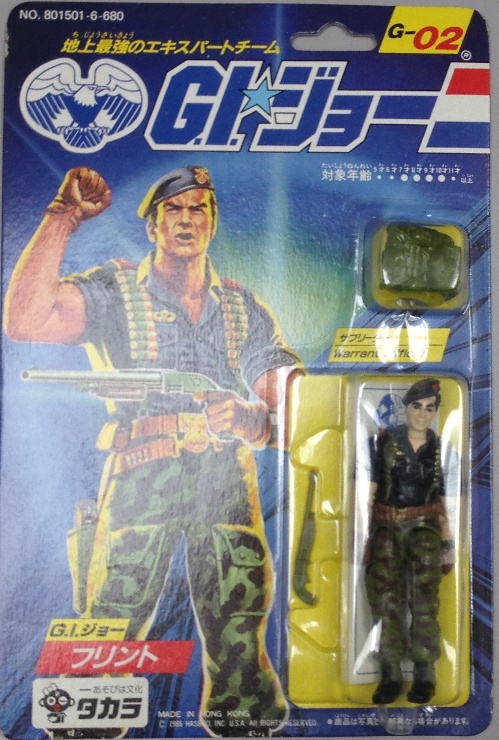 Posted by Robot_Sonic at 1:30 AM
Email ThisBlogThis!Share to TwitterShare to FacebookShare to Pinterest
Labels: Flint, Foreign Figures