As a foil to the G.I. Joe figures, Takara also released several Cobra characters.  However, they replaced the blue card color with a vibrant reddish orange hue.  This made it easy to spot the factions on the shelves in Japan.  And, it also gave modern collectors an interesting take on Joe figures from outside the U.S.  And, just in case the card color wasn't enough, there is a huge Cobra symbol preceding the G.I. Joe name brand to be sure kids were aware they were buying a bad guy.

The classic Cobra Trooper was one of the figures released released by Takara.  He features his classic card artwork from the original release.  The blue figure seems to explode off the orange and yellow background: giving him a nice visual difference from other instances of his release with the classic art.  The figure itself is the same as the Hasbro release and includes his rifle.  You'll see a sticker sheet behind the figure, too.  This was an add on for the Takara release.  Though, I'm not sure if it was a short lived promotion or these stickers were included with every Cobra Trooper.

Like all Japanese figures, the market has absorbed these Troopers.  Six or Seven years ago, you could still buy MOC Takara Cobra Troopers for only a slight premium over what you'd pay for a truly mint Cobra Trooper.  But, those days are gone.  However, the Takara figs are still cheaper alternatives for classic figures with standard card art when compared to their Hasbro counterparts from around the world. 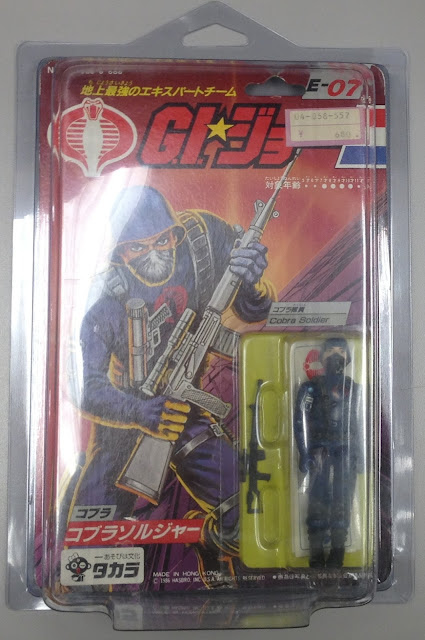 Posted by Robot_Sonic at 2:00 AM
Email ThisBlogThis!Share to TwitterShare to FacebookShare to Pinterest
Labels: Cobra Trooper, Foreign Figures