The 1993 HEAT Viper is not a great figure.  He's big and bulky, has an odd head and, is colored neon green.  As such, he's one of the cheaper army building figures you can buy.  After Hasbro released him in 1993, though, they sent the mold to Brazil where Estrela also released.  Estrela kept the neon coloring and general look of the figure.  But, they made one huge change.  Instead of remaining a Cobra army builder, the mold was released as a Joe.

Raio Verde translates as "Green Ray".  So, you have a Joe named Green Ray.  Which seems ridiculous but really isn't all that much worse than many other code names from the American Joe line.  Here is a loose transaction of Raio Verde's filecard:


It is part of the latest generation of g.i. Joe, In love with speed and motorcycling, there is no bike he has not yet piloted. Exploring to the maximum the limits of the machine, Green Ray and scaled in the actions in which we say of second will decide the success or failure of the mission.

The Commandos usually bet with green ray. It has to identify model, engine capacity and year of manufacture of the bikes only by sound. Until today, he has not lost any bets.

So, basically, he's a Joe version of Relampago.

The figure included weapons in neon green that were not available in that color in the U.S.  He has the standard '93/'94 era MP-5 inspired rifle, machete and shotgun.  He also includes a spring loaded missile launcher.  He was released in the final wave of Estrela figures around 1995.  If you could get the Estrela website to actually load on a browser in 1998, you could still find some catalog images from these late waves.  It was interesting to see some of the items from a time when all but the most famous Brazilian figures were impossible to find.

Really, there's no real way to determine this figure from the American figure, though.  The green is pretty much the same.  If the HEAT Viper were popular or decent in his own right, this figure would be more popular.  But, he's not.  As a novelty, the figure is cool.  And, he remains relatively cheap (though he's not as common as he was a decade ago) to acquire.  At one point, I had two of them, just because they showed up in lots of carded Brazilian figures quite often. 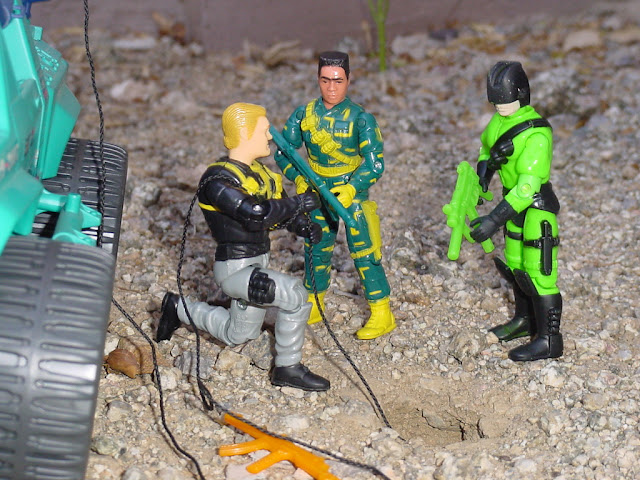 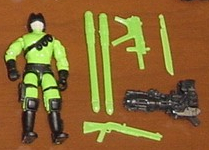