The Python Patrol Officer was released in the U.S. in 1989.  This repainted Cobra Trooper utilized the card artwork from the original release.  But, Hasbro updated the colors to match their new subset of figures that were brought to retail as Python Patrol.  Around 1993 or so, the Cobra Trooper mold showed up in Brazil.  Here, he was released in Python Patrol colors as Vibora.  While the toy mold remained the same as an American release, Vibora was given brand new card artwork.


Vibora features the classic Python Patrol coloring from the 1989 U.S. figure.  So, Hasbro sent those paint masks to Brazil for the swivel arm trooper mold.  But, this is the only connection to the U.S. release.  Vibora is in a completely different pose.  He also features his Brazilian exclusive weapons (a remake of Hit and Run's rifle and the Range Viper's grenade launcher) drawn into his hands.

Oddly, Vibor's name translates as Viper.  G.I. Joe fans know the Viper as the building block of the Cobra army and their successor to the original Cobra upon which Vibora is based.

The biggest difference I see in the two artworks are the characters eyes.  Vibora's eyes are wide and somewhat crazy.  He looks worried and overwhelmed by his station.  The Python Officer's eyes, though, look very, very evil.  He has the hardened face of a career mercenary.  Each of them is cool in their own way.  But, the eyes seem to be the biggest characterization difference between the two releases.


He is extremely vengeful. And fast in your actions. Perfect for being the commander of the Cobra attack jets. His thirst for vengeance leads him to despise danger. And when it lands, its speed leaves the inmates unreacted.

Once, at school, Vibora needed to take ten to not be disapproved. He had no doubts: he took the test from the most intelligent colleague, put his name and called the teacher. For what? To accuse the unfortunate of wanting to take his test. 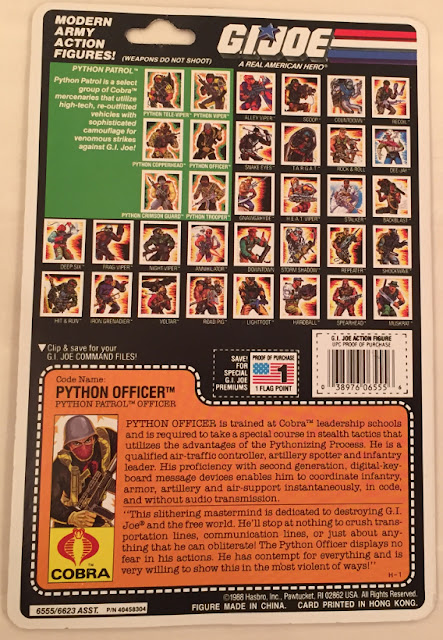