In 2001, Funskool figures started to be regularly available through U.S. dealers.  A byproduct of this is that collectors were able to follow the Funskool line's new released just like they did for Hasbro releases of the day.  The year started with the Desert Scorpion and General Flagg.  General Hawk debuted in the late spring.  And, in the summer, the hugely anticipated Crimson Guard Immortal became a staple of every good army builders' collections.  The final figure of 2001, though, was a bit disappointing to American collectors.  Wild Bill did feature the classic mold that collectors would have appreciated.  But, recolored in bright orange, the figure was an eyesore that quickly fell into obscurity among a collecting corps that was more interested in anything Cobra and Joes who weren't neon.

The figure itself, though, was a bit different from the card artwork.  Wild Bill's art was obviously taken from the 1992 Wild Bill figure, even while the release was from the 1983 mold.  Ostensibly, this may seem like a good bit of planning.  But, it could be more than that.  In 2000, Hasbro released Wild Bill as part of the first wave of the A Real American Hero Collection as the Locust pilot.  In this timeline, there were a few molds that moved back and forth between Hasbro and Funskool.  Hasbro recalled many molds for the 1997 and 1998 releases.  But, we know that Hasbro also shuffled off some molds to Funskool right after their use in 2000/2001.

As such, it is very possible that Funskool had planned to release the 1992 Wild Bill mold in the orange color scheme.  But, Hasbro recalled the mold and left Funskool with the original mold as their only option for Wild Bill.  It's also known that Funskool's molds were not well labeled at times.  So, it's also possible that Hasbro intended the 2000 Wild Bill to be the classic 1983 mold.  But, when Funskool returned it to them, they sent the 1992 mold by mistake.

At this point, it's unlikely that we'll ever know the true story of what happened with this figure.  But, we have a definite legacy where the card art does not match the figure that was released.  You will notice that Funskool modified the artwork to showcase the Funskool accessories.  This artwork also shows blue pants, which would have greatly broken up the Funskool Wild Bill's brightness. 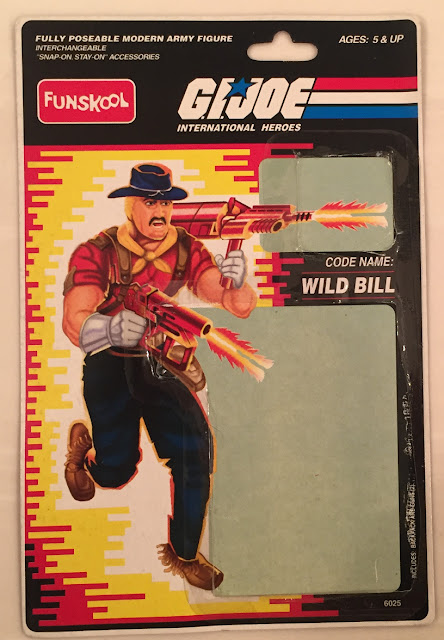 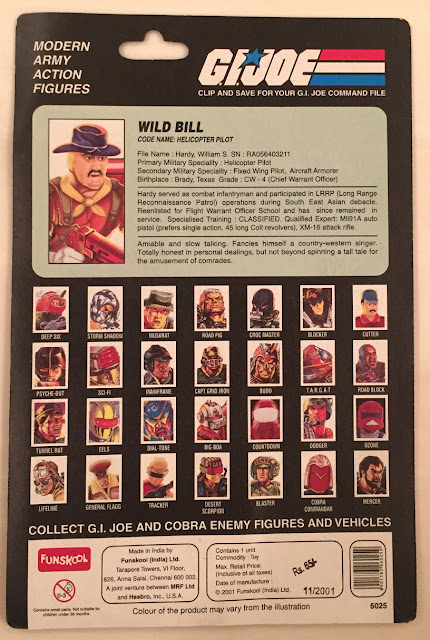