One of the first figures I showcased when I reincarnated the site was the Cobra de Hielo from Argentina.  This Stormshadow re-release was obviously based on the iconic American ninja.  But, the character was changed.  Rather than being the named ninja of the Arashikage Clan, the Argentine figure was a redo of a new character created in Brazil named the Ice Cobra.

Here is the Brazilian filecard:

Here is the Argentine filecard: 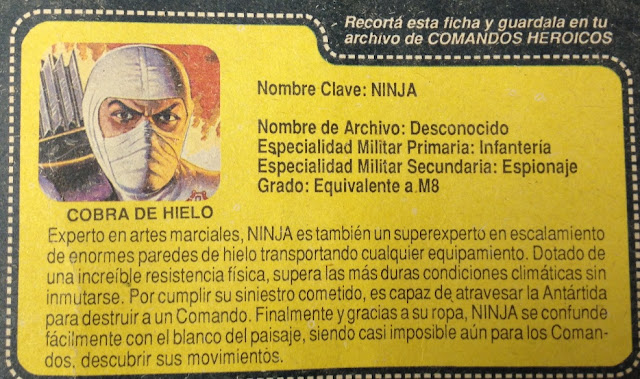 Here is a loose translation:

A martial arts expert, Ninja is a super expert in scaling huge ice walls with equipment.  Equipped with incredible strength, he overcomes the toughest weather conditions without flinching.  To fulfill his sinister task of destroying Comado, he will cross Antarctica.  Thanks to the Ninja's clothes, he is easily confused with the white landscape and it is almost impossible for the Comandos to discover his movements.

I'm not sure why Brazil and Argentina both released this update to the character associated with the V1 Stormshadow mold.  But, for kids growing up with Joe in these countries, the Stormshadow/Snake Eyes character dichotomy was very different.
Posted by Robot_Sonic at 4:28 AM
Email ThisBlogThis!Share to TwitterShare to FacebookShare to Pinterest
Labels: Filecard Translation, Foreign Figures, Ice Cobra