Estrela produced some very interesting unique figures for the Comandos Em Acao line.  Most are well known to collectors.  Among the most famous, though, are the Tiger Force and Python Patrol exclusives.  These figures took on a early collecting fame due to their ties to popular American subsets and the fact that they included popular figure molds done up in exclusive colors.

For his release in Brazil, Estrela came up with exclusive card artwork.  Below you can see Marujo in action.  The first noteworthy item is that he features the long sleeves to match the figure.  Gone are Shipwreck's short sleeves as Marujo uses the arms from the Ripcord figure.  You also see his his included weapons (Footloose's M-16 and LAW rocket launcher) displayed.  Sadly, my example of this cardback had the filecard removed.  If you could see Marujo's legs, his bell bottom pants are on full display.  This particular version of Marujo included face paint for kids to use.  But, there are other Marujo cards that did not include the face paint. 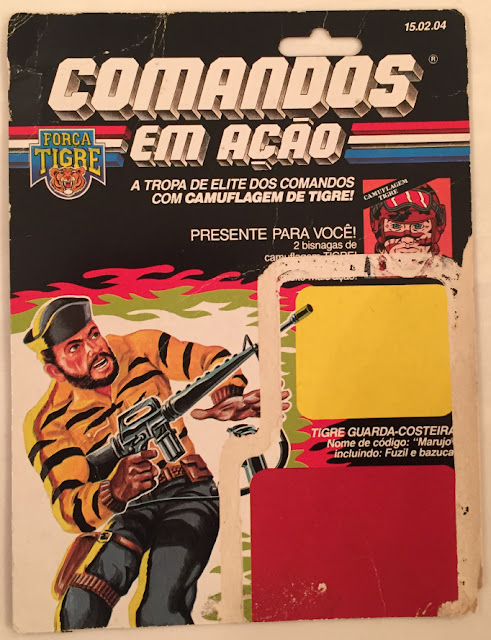 Marujo's cardback is interesting as it showcases 5 exclusive to Brazil figures: Relampago, Gatilho, Felino, Ar Puro and Marujo as the focal points of the cardback.  Below them are the regularly released figures from that time period.  It's odd to see figures from 1983 through 1987 sold in one series.  But, that was how Estrela designed their waves.  You'll also see the Comando Avancado.  This was a carded release of the Heavy Metal figure.  However, the exact figure was also bagged and offered as the mail away Rampage figure in the U.S. 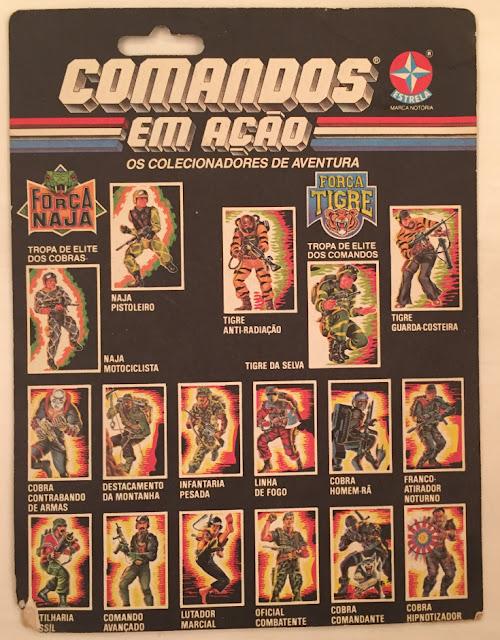 Like all Brazilian cardbacks, the cardboard isn't as strong or as glossy as Hasbro cards released in the U.S., Canada, Europe and parts of Asia.  But, the card size is comparable with American carded figures.