Plastirama cardbacks are, to put it mildly, junk.  They are made of much flimsier cardboard than the American cardbacks and lack the glossy sheen on front and back as well.  As such, finding high quality samples of the cardbacks can be tough.  But, enough warehouse overstock came to the U.S. and was opened by collectors that good enough samples of lesser figures are pretty common.

The cardbacks themselves followed the general theme of American Joes.  You see the photo grid of character artwork for the other characters that were available around the same time as the figure you purchased.  You also have the requisite filecard on the back.  Only, Plastirama filecards are a bright yellow color.  It's visually distinctive and helps obscure the fact that the cards aren't as shiny or robust as those that were released by Hasbro.

The main item of note is that the characters listed on the were limited to 10 for these two series of figures.  You see the "Nuevo" banks on various figures on the Condor cardback.  Condor was part of a later wave release.  What's odd is that Recondo is listed as an earlier Plastirama release.  However, Recondo was never produced in Argentina and disappeared with Leopardo in Brazil.  The theme of unreleased figures is carried over to the Alado cardback, too.  Here, we see both Barbecue and Flint.  While both were released in Brazil (and, later, India) they were never released in Argentina.  Why these figures showed up on the cardbacks but were never released is a mystery.  It could be the molds were recalled by Hasbro or were never sent on by Estrela.  But, they offer insight into some possible other outcomes for the Plastirama line. 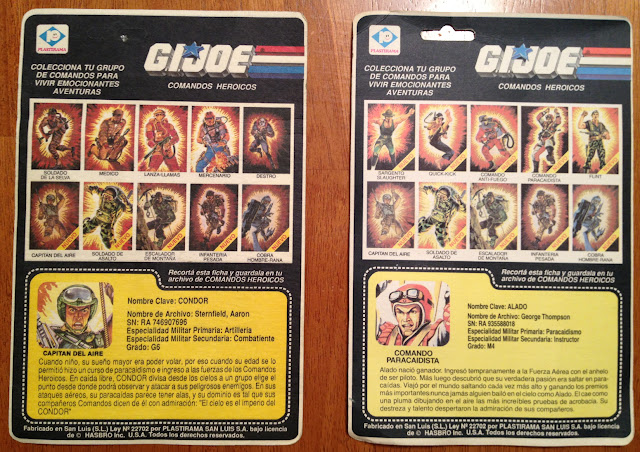 Posted by Robot_Sonic at 2:12 AM
Email ThisBlogThis!Share to TwitterShare to FacebookShare to Pinterest
Labels: Airborne, Argentina, Crazylegs, Foreign Figures, Plastirama