Funskool Big Brawler - Around the Web

For April Fool's day, I had to start International Joe month with the biggest joke of them all: the Funskool Big Brawler figure.  He's just so...Funskool.  Nonsensical neon colors.  A samurai sword.  And, the spectacular mutton chops from when such facial hair wasn't ironically terrible.  It all adds up to a figure that is just a must own due to his incredible badness.

It was terrible for collectors of the time to see the highly popular Outback mold was sent to India without Hasbro ever actually using it for an updated Outback.  And, that was part of the problem with Brawler in general: he was a poor Outback replacement.  Had the character been given another body mold with the 2001 release, it's likely that people would have written him off just like they did the equally terrible Sure Fire figure.  But, when collectors saw Outback's body being wasted on a new character, it was another tick mark that forever doomed the character.

This figure was available carded or bagged.  It was rare to see him packed in a vehicle as most Funskool vehicle shipments had been halted prior to his release.  But, large quantities of bagged overstock were sold for almost nothing to American dealers who then liquidated them into the collecting community.  So, there's a couple of ways to get the figure.  Here's the best content around the web on him. 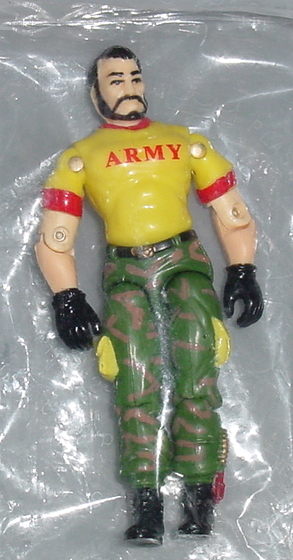 Posted by Robot_Sonic at 3:56 AM
Email ThisBlogThis!Share to TwitterShare to FacebookShare to Pinterest
Labels: 2003, Around the Web, Big Brawler, Foreign Figures, Funskool