There is a psychological phenomena called "False Memory".  The basic premise is that an idea is planted in someone's head and they, through time, fully believe that something that never actually happened, did happen.  This isn't someone outright lying.  In the case of False Memory, the person actually believes their memory.  Even if it is faulty.  This has been documented from everything from someone attending a major event to the flag raising at Iwo Jima.  In the toy world, though, it is most often attributed to the tons of kids form all over the U.S. who swear, up and down, that they got a Rocket Firing Boba Fett figure from the Kenner mail away in the late 1970's.  This memory is traced to the fact that early cardbacks trumpeted the feature, they were just covered with a black sticker.  So, kids had a way to know about the intended toy and their False Memories took over from there.

In the G.I. Joe world, though, the most persistent case of False Memory occurred more recently, in 1997.  Hasbro returned G.I. Joe to retail shelves in 1997.  Among the figures released was a repainted 1992 Destro figure.  A few years later, though, an odd, leopard spotted Destro variant came to be.  Hasbro admitted the figure had been created as a joke.  And, with that, the myth of the "Pimp Daddy Destro" took flight.

In the years that followed, many collectors swore up and down that they had seen the figure at retail.  Yet, despite all these claims, no one managed to buy one.  In 1997, the African American Rock and Roll variant figure was quickly discovered by collectors.  While it's likely that only around 1,000 of these figures exist, collectors quickly learned of the variant and began to comment on it.  You see, in 1997, the people buying Joes were collectors.  While I'm sure some kids did buy a few TRU Joes, it was collectors who drove sales.  So, they were aware of the figures from the get go.  Had the PDD actually been released in the U.S., there is no way it would have escaped collector attention and remained unknown until several years later.

There is the question, too, of whether the PDD was actually available on cards in the US.  Those who claim to have seen it at retail back in 1997 point to photos below of the carded PDD figure.  These are legit.  However, every single PDD that's been confirmed has come from Asian sources.  There are no confirmed figures that have ever been found in the U.S. that could not be traced back to Asia.  Hasbro added speculation to the fire when they said it "was possible" that a carded sample made its way to retail.  Some collectors immediately took this as evidentiary proof of their false memory.  Hasbro sources claim that they saw one at retail.  Which, again, how likely is it that one of maybe 4 or 5 figures shipped just happened to go to store where a Hasbro employee shopped and, again, didn't buy the figure?  For emphasis, there remain no confirmed retail sightings of a PDD figure and every figure that was found was traced back to Asia.

Hasbro admitted the figure was a joke.  And, as a joke, it greatly succeeds.  Destro in leopard print fits with the late 1990's perception of the character.  (Lando Calrissian saw similar memes in the same time period.)  And, due to the absolute visually stunning difference as well as the fact that anyone who saw this figure would have been in the joke, it makes it all the more unlikely than anyone ever found this figure in the United States.  As a novelty, the figure is cool.  Had he been released, I'd own one and would likely use it in many photos.  But, as a $1,000+ novelty, my desire for the figure cools considerably.  The joke's not that funny.

It is not known how many Pimp Daddy Destro figures are out there.  However, the figure is more common than many dealers who have one want you to believe.  At one time, around 2004, a collector kept a list of verified PDD figures and their owners.  His list was at 36 before a fellow collector acquired 4 at once.  Since then, there were another 30 or so that were confirmed to come into collector hands.  So, the number of PDD's is likely between 70 and 100, and maybe even higher.  Before some prominent members of a Joe collector group had a PDD, they claimed that hundreds of their fellow group members had the figure.  After they acquired one, though, those claims terminated and they officially tried to say there were only a few of the figure out there.  So, there's lots of misinformation.

The reality is that the figure is rare, but not nearly as rare as the 1998 Chocolate Chip figures.  But, the fame and notoriety of the Pimp Daddy Destro outpace that of any other unproduced item.  (The fact that Hasbro "sanctioned" the character with a San Diego Comic Convention exclusive figure in the anniversary figure design only added to the legend.)  So, when you are in the market for the figure, you are paying more for these attributes than you are for rarity.  But, the sheer outlandishness of the figure's design and the myths around it have created a monster far bigger than the reality justifies. 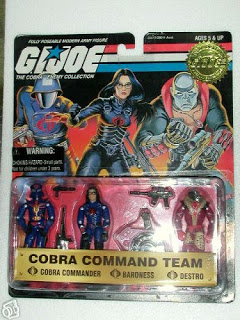 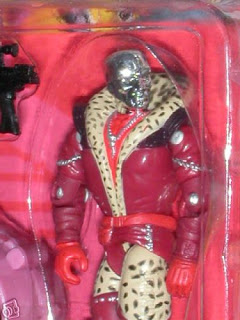 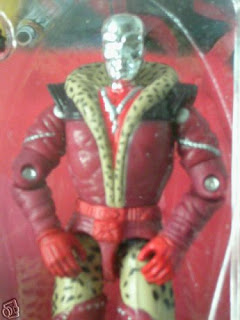 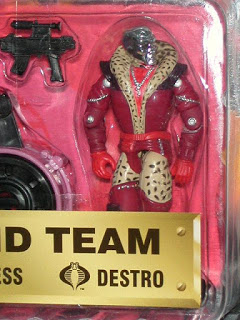 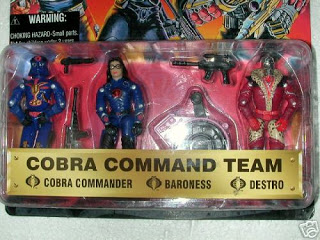 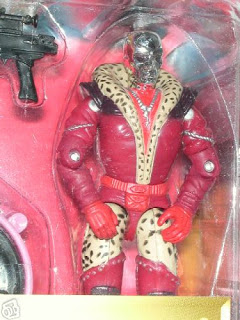 Posted by Robot_Sonic at 2:30 AM
Email ThisBlogThis!Share to TwitterShare to FacebookShare to Pinterest
Labels: 1997, Destro, Rarities