At the 2002 G.I. Joe Convention, an odd Dusty figure appeared in a Hasbro made diorama.  It was the 1991 figure mold, but in a color scheme that had not been seen before.  Well, that's not entirely true.  It had been seen before a year earlier at an obscure toy show where Hasbro was in attendance.

The figure, seen below, was in desert colors with a black beret.  Back in 1998, there was supposed to be a desert themed repaint of the 1983 G.I. Joe Headquarters that was going to be released with 5 figures: Outback, Dial Tone, Law, Pathfinder and Dusty.  There are production level samples of 1998 "Chocolate Chip" versions of Outback, Dial Tone and Pathfinder.  (They are the rarest American made Joes out there.)  However, Dusty and Law never turned up.  It's likely that the HQ was canned early in the process after the mold couldn't be found.  There were rumors that the Outback, Pathfinder and Dial Tone were going to go into a 5th three figure pack in 1998, but were scrapped as well.  (That's why they exist as production level figures and the other two do not.)  In 2000, Dusty and Law appeared together in the first wave of A Real American Hero Collection figure packs.  But, that Dusty was a drastically different (but awesome!) color scheme.

In 2001, at this obscure toy show, Hasbro showed off the upcoming Desert Striker toy.  In the second (small!) photo below, you can see the driver is this Dusty figure.  Was this paint job intended for the Desert Striker?  If it was, why was he removed?  And, why was he replaced with an Eco Warriors Flint figure!?!  It might be that this Dusty is a remnant of the 1998 figures and was a placeholder for the 2001 vehicle but was replaced since the 2000 figure was carried over into Wave II and was available as a 2 pack figure already.

This figure remains a mystery.  It is not known if this figure ever made its way into collector hands.  If it did, the owner hasn't talked about it!  Knowing what Hasbro has done with the vintage Joe line and disdain that modern Hasbro guys have for it, it's also quite possible that this figure was destroyed or thrown away: the person authorizing it not realizing that it was an unproduced variant rather than a common production figure.  Hopefully, this figure survives.  While not a great repaint of Dusty, it would have been something different and a nice update to the character.  It certainly would have been welcomed in the 2004 Desert Toys R Us exclusive set instead of the Dusty they actually released. 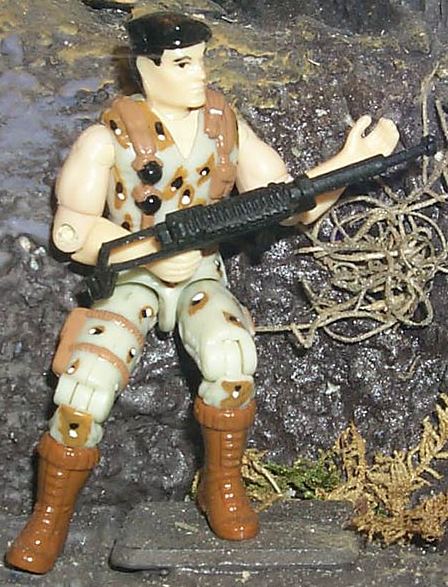 Posted by Robot_Sonic at 4:00 AM
Email ThisBlogThis!Share to TwitterShare to FacebookShare to Pinterest
Labels: 2001, Desert Striker, Dusty, Rarities