In late 2002, Hasbro surprised collectors with the 8 figure Gift Set.  Originally, the set was exclusive to the BJ's chain of wholesalers.  But, later, the set was also made available to some other outlets.  The set was expensive, in way too much packaging and not available at retail in large sections of the country.  The figure selection wasn't the greatest, either.  So, collectors filed it away and checked it off of lists without paying much other thought.

In early 2003, though, a couple of odd figures appeared.  One was a Roadblock that looked like the BJ's figure, but with a red torso.  The other was a BJ's Firefly, but with a metallic green base body.  These were the talk of the collecting world for a few weeks.  But, in that era of constant Joe news, the figures were relatively forgotten, too.

In 2004, though, it became apparent that Firefly and Roadblock were not the only alternate figures that were originally looked at for the BJ's set.  Dial Tone was, originally, missing his mustache, just like the 2000 figure.  The Fast Blast Viper and Wet Suit had slight color shading differences.  The third major variant, though, was a new Undertow figure.  Rather than the bright red base, the figure featured a white base and appeared as an arctic version of the character.

Like the Firefly and Roadblock, though, this Undertow seemingly disappeared.  While not overly expensive these days (as compared to other, unproduced figures) these alternate BJ's figures are not easy to find.  They were lost in the hype of the other, newer unreleased variants that were showing up every other day during 2004 and 2005.  But, these variants remain an interesting footnote to Joe history.  Personally, I think Firefly and Undertow are improvements over the released figures.  Roadblock is not.  But, missing out of the ridiculous BJ's Firefly was likely not worth the green figure seen below. 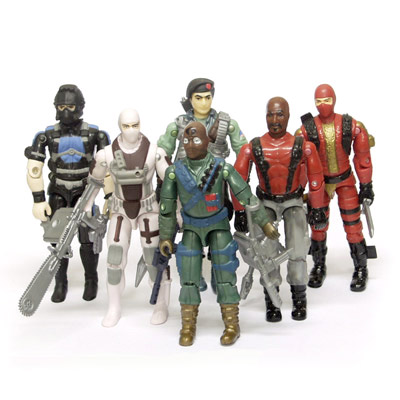 Posted by Robot_Sonic at 2:00 AM
Email ThisBlogThis!Share to TwitterShare to FacebookShare to Pinterest
Labels: 2002, BJ's Exclusive, Rarities, Retailer Exclusive, Unproduced