In the early 2000's, tons of pre-production and prototype figures made their way into collector hands via Asian toy sellers.  Many of these figures were the same as the production level releases.  Others had slight differences while some were drastically different.

Below you can see a sample of the types of figures that were coming over and how the differences played out.  The most glaring sample is the white pants Action Man figure.  Action Man was changed from Tracker very late in the game and the primary pants color for the whole set was changed even later than that.  Most of the other figures have slight variances, as well.

The trouble is categorizing all these pre-production figures.  While they aren't variants in the traditional sense, they are something that should be tracked as possible acquisitions by collectors.  Some figures have a full complement of changes with different samples sporting different combinations.  Others have one, common, difference that is consistent.  Much of the work on these figures has likely been lost.  The forums where the research was done no longer exist and many of these figures have simply disappeared into collections.  The lack of popularity on the "New Sculpt" figures also diminishes much of the interest in these figures today.  But, they are out there. And, they give the completist another round of nightmares as they try to find them all. 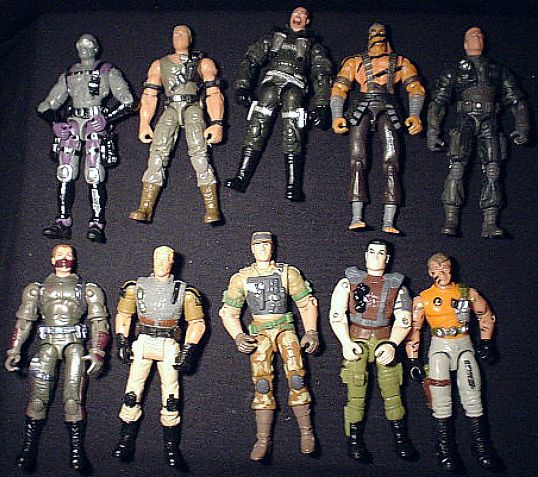 Posted by Robot_Sonic at 3:30 AM
Email ThisBlogThis!Share to TwitterShare to FacebookShare to Pinterest
Labels: 2003, 2004, Rarities