For the most part, G.I. Joe figures come in two flavors if they are not Hasbro produced items: fully licensed figures produced by another company or dreadful, inarticulate knock offs that would be overpriced in a .99 store.  There, are, though, a few exceptions.  The most interesting use of Joe based molds in an unlicensed capacity occurred in Europe where an exclusive line of figures named European Force were released.

A cursory look at any European Force figure quickly identifies it as using Joe molds.  A wide array of figures from 1984 through 1987 comprise the series of figures.  The question, or course, is did they use the actual Hasbro molds?  Or, did they create their own, knockoff molds and use them?  I've never actually owned a figure.  And, the information out there is pretty sparse.  From the best I can tell, the figures do not look like they were recast molds.  The technology of their release period would have produced parts with detailing as crisp as you see below were the molds recast.  So, how did the company get access to the parts?

You will see that the figures were made in China.  So, it's possible that a dishonest Chinese factory simply rented out the molds to the French company who made the figures.  Or, maybe, Hasbro was paid a small sum so their molds could be used.  It would be very interesting to know how these figures came to be and if Hasbro was even aware of their existence.

The figures mostly have French based names as they were, most likely, made by a French company with mostly French distribution.  But, no one can ever, ever discount the genius of naming a figure Eclair.  That alone makes this line worth owning.  But, the entire line features some interesting repaints and reuse of parts.  The premise appears to be a group of good guys, the "European Force" against a group of bad guys named MyGal.  Mygal loosely translates as Spider or Tarantula.  (Which explains the spider on the MyGal figure's leg.)  And, is a pretty blatant rip off of Cobra.  But, most bootlegs are only as good as what they rip off.

There were, according to the cardbacks, 12 figures in the series.  8 good guys and 4 bad guys.  From the few carded samples I could see, the accessories on the cardbacks are probably fairly accurate, but also incomplete.  The carded figures and even some high quality loose samples include more than what is shown on the cardbacks.

European Force figures are not easy to find.  Even finding photos of them can be daunting.  But, their sheer terribleness makes them worth seeking out.  A quick look at the card art (at least the little I could find) seems to show that the good guys got one design (with a character that looks like Duke) while the bad guys got another design.

First up are some carded samples of the figures. 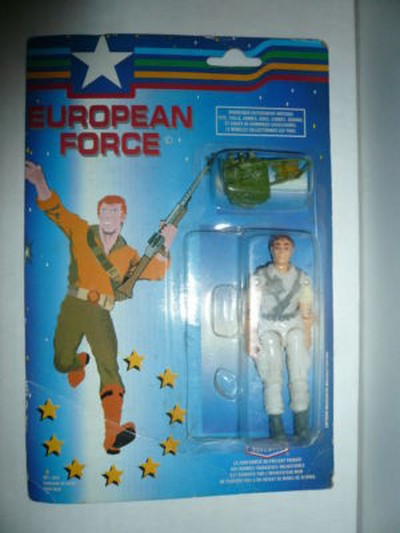 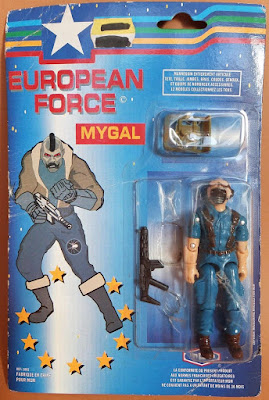 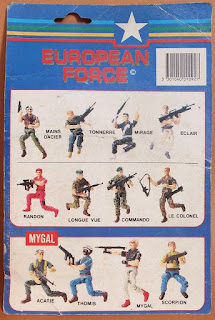 Here you can see the infamous Eclair figure as well as the Thomis.  It's a good representation of both the European Force and MyGal cardback differences.  It's likely there were just the two cardfronts.  The MyGal artwork is based on the 1983 Destro.  You see the metal face, but with a mustache and mohawk.  The actual MyGal figure uses a Buzzer head with these details painted on.  The artwork outdoes even the worst of Funskool and makes these worth owning.

Here are some loose samples.  As you can see, the quality isn't perfect.  But, finding mint condition figures is tough.

The most interesting part of these figures is that they all seem to use the same arms and legs.  It's oddly unsettling, especially the lower arm part.  But, it was a likely cost cutting move for the molds in general.  The figures also use just two waist pieces among them.  (I'm not good at identifying the exact waists, so if anyone can, please comment below.)

If you look through the figures, you see lots of parts reused.  Flint, Falcon, Dial Tone, Mercer, Iceberg and General Hawk appear multiple times across the figures.  Even heads are reused. 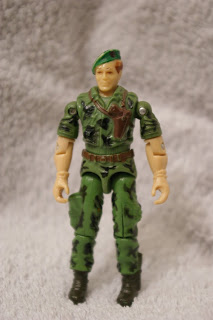 Next up is Commando.  He uses Flint's head and the 1986 Iceberg's chest.


Then we have MyGal.  He is the enemy leader.  It is a 1985 Buzzer chest and head, but with a painted mustache. The figure's hair is painted to resemble a mohawk.  (I don't know if it extends to the pony tail on the mold, though.)  Note the spider on his leg denoting him the leader of the MyGal gang. 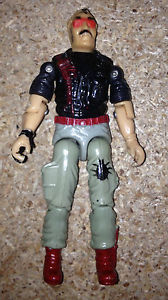 Next is Mains Dacier.  He features an 1986 Mainframe head: also with a painted mustache.  This is combined with the 1986 General Hawk chest.  Mains Dacier is shown with a different pistol on the cardback.  But appears to have included the 1986 Low Light uzi and a 1987 Falcon backpack. 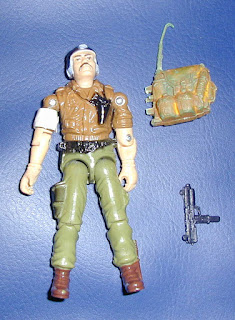 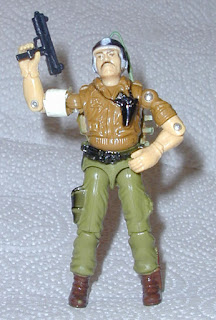 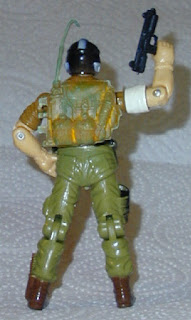 The accessories seem to be an odd blend of yellow, green and brown colors.  They definitely look lower quality than American accessories...at least on the packs.  Note that Buzzer's gas can was modified to work as a pack rather than to fit on the frame. 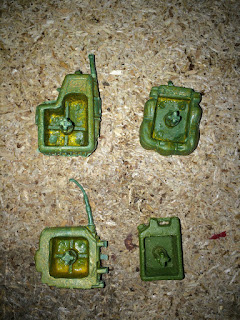 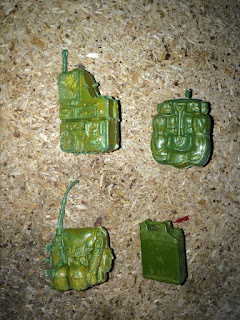 Here is a better photo of Le Colonel. 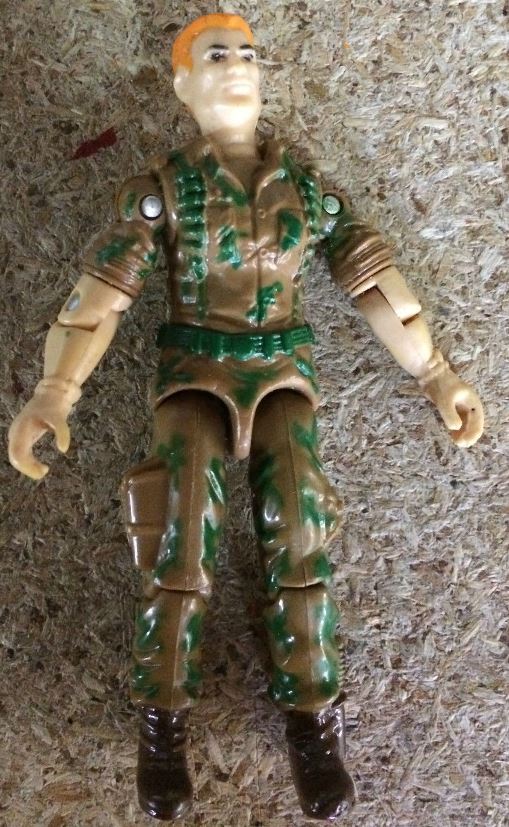 Here is an Acarie figure using a Caucasian head of the 1986 Iceberg. 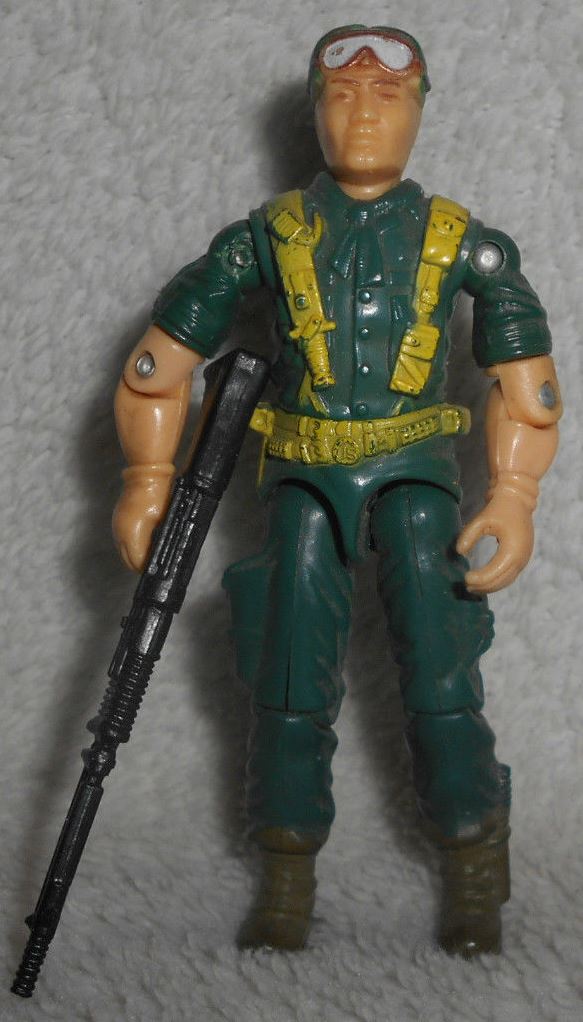 Here is another Thomis figure along with Randon.  Randon uses the 1986 Dial Tone head and chest. 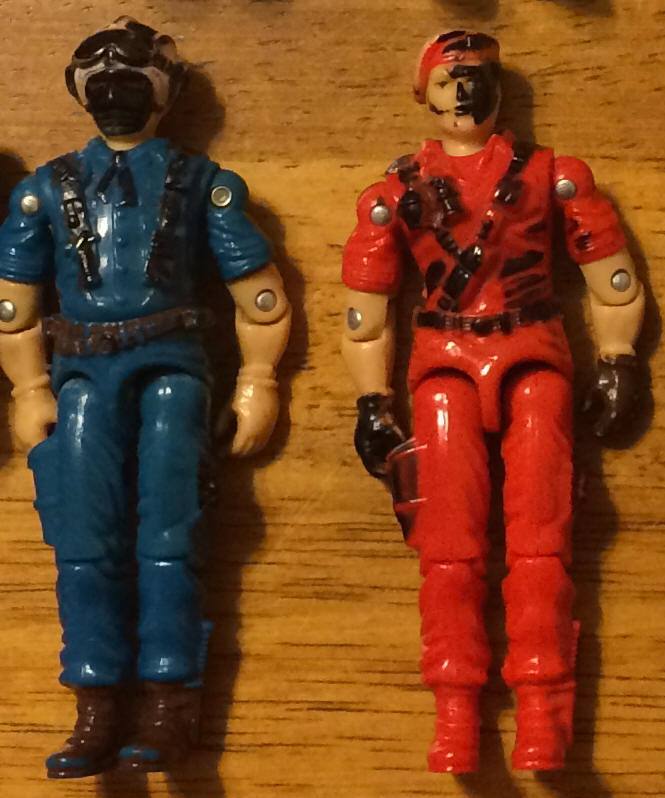 You can see above that there might even be variants in the figures.  The Thomis figures (using the Snow Serpent head and Falcon chest) appears in dark, almost Cobra, blue in the final photo as well as his carded appearance.  In the first loose photo, though, Thomis appears to be a much lighter blue.  It's possible this is a bad photo or discoloration.  But, there is so little info about these figures out there that it's difficult to determine if it's a variant or just poorly conditioned figure.  (You can see more examples of Thomis in the group shot below, too.)

Here's some low quality group shots of the two factions:

In the above photo, you have Tonnerre who uses the Dial Tone chest and Mercer head.  (Check out that peach shirt.  Awesome!)  Mirage is next, using the 1984 Duke chest and head.  Then Eclair using a General Hawk head and Dial Tone body.  Randon, Longue  Vue and Le Colonel round out the photo.


This final photo shows the bad guy members of MyGal.  You have the Scorpion figure followed by Thomis.  (The blues here look like discoloration.)  Next is Acarie.  Acarie uses a Caucasian 1986 Iceberg head with a Falcon chest.  He appears more green than the cardback suggest.  Last is another MyGal figure.

The value of these figures is tough to measure.  High quality samples are few and far between.  Many collectors don't know about them and they are not G.I. Joe figures.  But, using the vintage molds does drive interest.  Individual figures sell anywhere between $40 and $150 depending upon condition, completeness and desirability.  Thomis seems to be the most common as I found the most examples of him.  Scorpion, Le Colonel, and Longue Vue also seem easier to find.  Despite his infamy, Eclair is tough to find with Tonnerre, Randon and Acarie.  The rest are somewhat in between.  Considering the figures' rarity, I would expect to pay a bit for them.  Especially if you can find the harder to track down figures in top quality condition.

Overall, there is a lot to like about these figures.  The race changing Iceberg and Red Dog heads predated their Funskool representations.  The orange haired Mercer is rather striking.  And, the painted facial hair on MyGal and Mains Dacier are wonderfully cheesy.  The colors on Tonnerre make him a figure I actually want to seek out.  These are just an oddity that rivals the best in the world: and one that few collectors really know about.
Posted by Robot_Sonic at 3:00 AM
Email ThisBlogThis!Share to TwitterShare to FacebookShare to Pinterest
Labels: Bootleg, European Exclusive, European Force, Rarities