Of all the figures that showed up in the mid 2000's from Asian sellers, the one below is most flummoxing.  Pretty much all of the other figures were variants of figures that actually saw release.  A few were legit unproduced figures, but they were backed up by having appeared at conventions or in Hasbro documentation.  This Steel Brigade figure, though, did not.  His origins are completely unknown.

This figure was actually sold frequently for a short time.  He often appeared in the standard weekly lots that Asian sellers would post.  But, he always sold high.  Even in 2004 and 2005, this was a $100 figure.  Aside from the public auctions, many collectors worked directly with Asian sellers to acquire this figure privately.  They usually paid the public prices.  But, these quiet sales helped to keep the speculated number of these figures in circulation down below the actual levels at which the figure exists.  But, this isn't to say the Steel Brigade is a common figure.  Even the Asian sellers of the time admitted that this guy's supply was extremely sparse.  So, he is, likely, one of the rarest alternate Asian figures to exist.

As a figure, this guy isn't all that great.  Yes, it would have been great to have access to a modern Steel Brigade figure during that time.  But, seeing the Firefly chest and arms again in 2004 was just exhausting.  So much so that the figure would have likely been ill received had it gone to production.  But, that wouldn't have stopped me and many others from acquiring them en masse had it seen a retail release.

The figure's coloring is decent enough.  It would have blended with existing Steel Brigade figures.  But, still been different enough to stand on its own.  Seeing this figure makes the terrible Greenshirts set just that much worse.  Had even one figure in that set been replaced with a Steel Brigade figure, that set would have been redeemed and useful.  Knowing that Hasbro had the mold available is just another frustrating part of that era in G.I. Joe's history.  They could have released this figure, or even just this head, and created something so much better than what they actually released.

These days, this is a pricey figure.  There's not a lot of them and it's probably the most famous and desirable figure from the entire pantheon of unreleased/alternate figure concepts.  As a rarity, I'd love to get one.  As a collector, I lament that we didn't get this figure at retail.  He would have been a cool addition to the line. 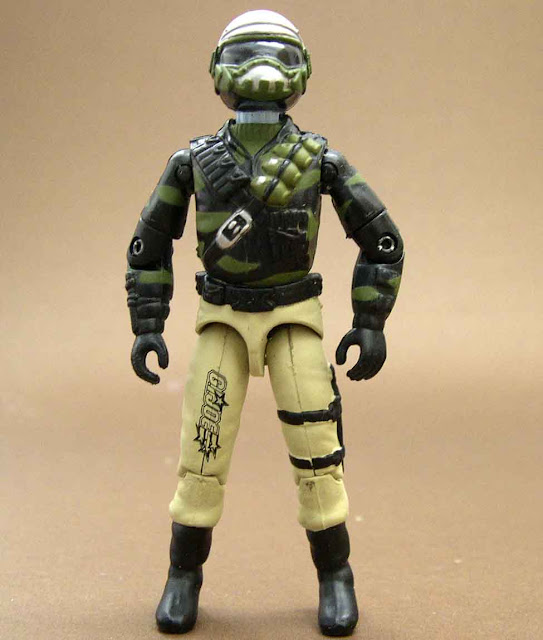 Posted by Robot_Sonic at 3:00 AM
Email ThisBlogThis!Share to TwitterShare to FacebookShare to Pinterest
Labels: Rarities, Steel Brigade, Tiger Force