Everyone is aware of the rare and valuable purple Funskool Ripper that was released in India.  But, there are more variants of this figure as well.  Here is an example of a neon green vehicle driver Ripper who is also missing the gold paint on his arm band.  As variants go, it's about on par with some of the Funskool we've seen.  But, the neon works for the Ripper character and is a cool interpretation of the mold.

Through the years, more and more older, unopened Funskool vehicle stock came to the U.S.  In it, collectors have found some rather odd and interesting figures.  Everything from the "Disguise Force" set to a Gung Ho colored in olive drab have been found.  This Ripper is another example.  It seems that Funskool often did vehicle driver figure runs separately from some of their carded figure runs.  So, you see variants that range from missing paint applications to new parts (usually waists and upper arms) to significant color variations.  Of course, to find many of these items, you'd have to open dozens, if not hundreds of Funskool vehicles.  There was a time when finding that many over a diverse production date range was possible.  But now, it is not only significantly more difficult, it is also significantly more expensive.

Ripper had a long life in India and was produced in many different production runs.  As such, minor color variants are common.  While it was great to get a chance at any Ripper from Funskool in 2002, it would have been better had it been one of the more interesting variations.  Funksool created a pretty good assortment of odd Dreadnoks.  But, the ones that were most accessible to American collectors were just slightly brighter versions of the common, American figures.

Few of these Rippers are known to exist, though there are likely many more in India.  But, it's just another example of the rare and cool oddities you can find in the boxes of old, unopened Funskool vehicles. 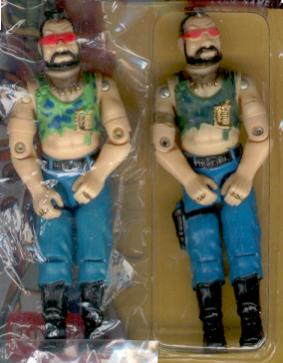 Posted by Robot_Sonic at 3:30 AM
Email ThisBlogThis!Share to TwitterShare to FacebookShare to Pinterest
Labels: Dreadnok, Funskool, Rarities, Ripper