Everyone knows of the ultra rare 2nd series figures from Plastirama in Argentina.  In 2003, though, it was discovered that this figure wave also saw an exclusive re-do in Venezuela from the Rubiplas toy company.  Shimik, Redmack, Glenda, Manleh, Topson and the infamous Cobra Mortal were released in Venezuela: some with unique paint applications.  While the white Cobra Mortal is the most famous variation, some other figures features slight differences as well.  Collectors love nothing more than a foreign repaint of a super rare figure that is even rarer than the original.  Below are some of the Rubiplas figures. 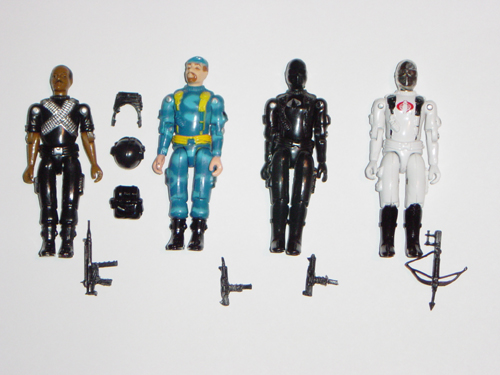 While the differences on the non Mortal figures are slight, it is the Mortal itself that is the most interesting.  The white base of the figure is much more useful than the red, black and chrome version from Argentina.  Though, had the white version come first, I suspect that some of the luster would have fallen from the Mortal since this version isn't as strikingly odd as the Plastirama figure.

We still don't know why Plastirama came up with the 6 new characters for their 2nd series of figures.  Nor do we know why they are so scarce.  The fact they sent them to Venezuela where Rubiplas also produced them is one of those oddities that befell the Joe line.  The rarity and popularity of these figures prices them out of most collectors' range.  The fact that they are straight arm figures limits my interest in them.  It would have been cool to see someone produce a set of these with swivel arms when the majority of the molds were still around.  I'd have loved a Manleh and Shimik figure.  But, like many obvious re-uses of vintage Joe molds, that's a desire left unfulfilled.

Venezuelan Joes are among the most difficult to find in the world.  Though, we have seen more and more of their items available as the Internet makes the world a smaller place.  (A tanking Venezuelan economy also plays a part.  Plastirama figures were nearly impossible to find until the Argentine economy collapsed in the early 2000's.  Then, they suddenly became almost common for a while.)  These figures are an example of the wide array of interpretations the Joe line received in other countries.  Were it not for their rarity, I wonder if they would be overly popular.  But, as we've seen in recent years, foreign oddities, even ones that exist in large numbers in the U.S. have steadily risen in price.  So, the uniqueness of their release would likely ensure collector interest, even if these were as common as the Plastirama Sgt. Slaughter.
Posted by Robot_Sonic at 2:30 AM
Email ThisBlogThis!Share to TwitterShare to FacebookShare to Pinterest
Labels: Cobra Mortal, Foreign Figures, Rarities, Venezuela