So, what is this?  At first blush, this appears to be an alternate color scheme of the 2003 Convention Exclusive Swamp Viper figure.  Based on the mold and timing of its appearance, this is probably likely.  But, Convention figures in the alternate color schemes are fairly rare.  While the 2002 had a full set color variant, that was more the result of bad plastic color mastering than a definitive unproduced concept.  The other alternate convention figures have been color variants and slight differences.  This figure, though, is drastically different.

The main change is the black base color instead of blue.  The figure also has copperish highlights instead of black.  It's a starkly different look for the Swamp Viper.  When this figure appeared in late 2004, though, it lead to great speculation that it was not a convention figure but an upcoming, unannounced exclusive.  That never came to be and the Mega Viper mold died with just the Swamp Viper and this unproduced variant.

These figures were not uncommon in 2004 and 2005.  They were often sold in sets of three.  But, those sets often sold for around $100.  That made the among the most expensive alternates of the time and also explains why you don't see too many of them today.  But, there are more of these out there than many people realize.  I'd have greatly enjoyed a retail release of this figure in 2004 or 2005.  The Mega Viper mold with a black Hiss II would have been an amazing exclusive.  But, it never came to be and this unproduced figure remains a another reminder of unrealized Hasbro potential. 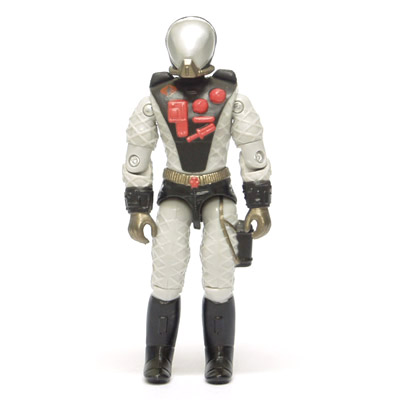 Posted by Robot_Sonic at 2:30 AM
Email ThisBlogThis!Share to TwitterShare to FacebookShare to Pinterest
Labels: 2003, Convention Exclusive, Rarities, Swamp Viper, Unproduced