In 2001 through 2003, every toy dealer under the sun tried to sell Funskool G.I. Joe figures.  They were cheaply available from India and American collectors were snatching them up with gusto.  While the carded figures were the most common items found at various toy sellers, a few also offered vehicles.  Funskool vehicles often included bagged figures.  Mostly, these were unaccessorized versions of the highly available carded figures.

In 2002, though, a dealer found a surprise in some of his vehicles.  These three differently colored Funskool figures were included in select few vehicles.  These color combos never appeared on any carded figure offering.  The most interesting part of the color choices is that they are familiar.  Blaster's colors were used on the Funskool General Hawk figure.  Psyche Out's colors appeared on the Funskool TARGAT figure.  Spearhead's colors are more unique.  But, may have been for a Funskool design that never came to be.

Regardless, there are very few of these figures that were found.  However, it is known that Funskool never produced figures in numbers lower than around 3,000.  So, it's not like they are prototypes.  But, they are hard to find and a great reminder of the weirdness that was the early 2000's Funskool. 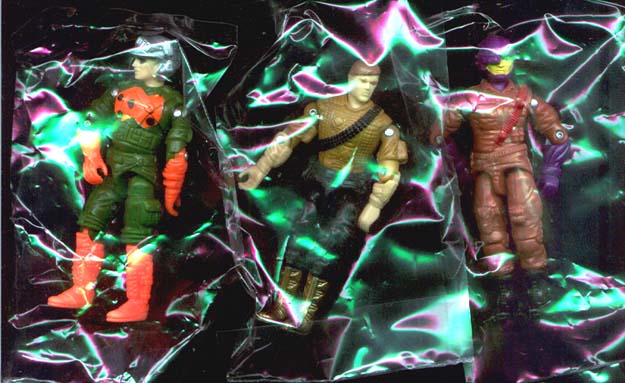 Posted by Robot_Sonic at 2:30 AM
Email ThisBlogThis!Share to TwitterShare to FacebookShare to Pinterest
Labels: Funskool, Rarities