The Chinese Major Bludd figure is one of the most common foreign figures to appear in Joe collections.  This is a combination of his great availability and low price.  These make the figure attractive to potential buyers.  But, the quality of the figure is the real calling card.  This version of Major Bludd uses parts from the General Flagg, Lamprey and Super Sonic Fighters Major Bludd figures.

The card art itself is taken from the 1983 Major Bludd figure.  So, neither the mold nor accessories match what was actually included with the figure.  You see some English and non some non-English text combined on the cardfront.  The safety warning being in English is odd.  But, that warning mentions children under 36 months old while additional safety text at the bottom mentions the boy being suitable for kids 5+ years old.  It's a constant contradiction.  You will note the Hasbro logo on the bottom, indicating the figure was Hasbro made and is comparable to other, vintage Joes in terms of quality. 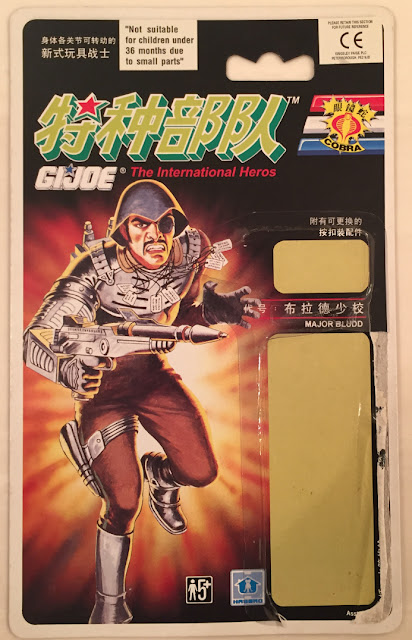 The cardback shows the Chinese line.  Again, you have an eclectic mix of figures with 1983 molds right alongside those from the 1990's.  However, in the case of Destro and this Major Bludd, the molds used were from later figures.  Duke and Cobra Commander used their classic molds.  (With slight modifications on Duke.) While Roadblock was actually the Tiger Force version of the original mold. 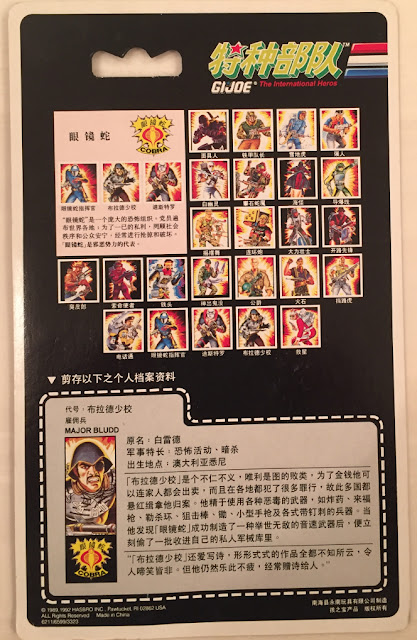 Over the years, I've tried to translate Major Bludd's filecard a few times.  However, I have yet to be successful.  So, if anyone can translate it, please leave the info in the comments.

Through the years, there's been lots of speculation as to the audience for these figures.  However, large quantities of overstock Chinese figures were sold in U.S. liquidation and close out stores in the mid 1990's.  That is the source for the vast majority of the figures that populate collections today and is responsible for the cheap availability of the figure.